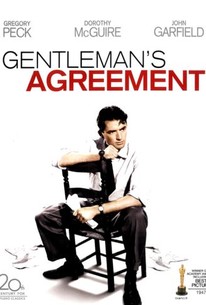 Critics Consensus: It occasionally fails to live up to its subject matter -- and is perhaps an 'important' film more than a 'great' one -- but the performances from Gregory Peck and Dorothy McGuire are superb.

Critics Consensus: It occasionally fails to live up to its subject matter -- and is perhaps an 'important' film more than a 'great' one -- but the performances from Gregory Peck and Dorothy McGuire are superb.

Critic Consensus: It occasionally fails to live up to its subject matter -- and is perhaps an 'important' film more than a 'great' one -- but the performances from Gregory Peck and Dorothy McGuire are superb.

Adapted by Moss Hart from the novel by Laura Z. Hobson, this film stars Gregory Peck as recently widowed journalist Phil Green. With a growing son (Dean Stockwell) to support, Green is receptive to the invitation of magazine publisher John Minify (Albert Dekker) to write a series of hard-hitting articles on the scourge of anti-Semitism. In order to glean his information first hand, Green decides to pose as a Jew. As the weeks go by, Green experiences all manner of prejudice, the most insidious being the subtle, "gentleman's agreement" form of bigotry wherein anti-Jewish sentiments are merely taken for granted. Green's pose takes a toll on his budding romance with Minify's niece Kathy (Dorothy McGuire), who comes to realize by her own example that even those who insist that they harbor no anti-Semitic feelings are also capable of prejudice. Watching from the sidelines is Green's lifelong Jewish friend Dave (John Garfield, in what may be his best performance), who despite his inherent rage over the iniquities of racism has learned to be philosophical about the failings of his fellow man-but not to the extent that he's willing to give up the fight against blind hatred. Though warned by several Jewish film moguls that to produce the film would merely "make trouble," 20th Century-Fox chieftan Daryl F. Zanuck (who was not himself Jewish) saw the project through to its conclusion. The wisdom of Zanuck's decision was proven when Gentleman's Agreement not only made a fortune for Fox, but also won three Academy Awards, including Best Picture, Best Director (Elia Kazan) and Best Supporting Actress (Celeste Holm). ~ Hal Erickson, Rovi

The film is great stuff throughout, and Is well worth seeing.

Here is a great and moving film -- the best that has come from an American studio for several years.

The words ring out with clarity from the Mayfair screen and there is no mistaking their meaning. They are not lost on the wind, but hit you full in the face, making you sit up and take notice of the force behind them.

Agreement was tame, cautious stuff even back then.

By dispassionate critical standards, Gentleman's Agreement is not a success. It is a tract rather than a play and it has the crusader's shortcomings.

The movie is as powerful today as when it captured the Best Picture Oscar a few years after Hitler's genocide ended in Europe.

In the end (aided by a momentous parting shot), the human drama feels just as powerful as the morals.

Gentleman's Agreement is the sort of film that contains the usual drama for a Zanuck movie but the subject matter is what makes the film so groundbreaking.

Gentleman's Agreement still comes across as a smart, incisive, and engrossing drama, and although times have changed since 1947, the subject it so boldly tackles remains timely and relevant to this day.

It is brave in having something to say about a problem of living today and it is outspoken in the saying of it. It has been directed with rare understanding by Elia Kazan.

The film's tone towards anti-Semitism is not the harsh note of intellectual indignation, but the polite murmur of argument. The film reduces a grave problem to dialogue.

Much of the 'message' is lost in a welter of words. Sentiment, too, is spread as thickly as we would like our rationed butter.

A newspaperman lies and tells his co-workers that he's Jewish in order to experience prejudice. A strong performance by Gregory Peck is the main attraction to this film. That sonorous voice, his unflinching gaze, and his imperious demeanor make him the type of person who exudes integrity, and when he plays characters like Phil or Atticus Finch, actor and character become one. The film is reductive in its treatment of race/prejudice. I don't think one can truly understand prejudice by "playing Jewish." Yes, one can come close, and one can feel discriminated against in a cursory way, but I imagine that prejudice cuts deeper if one has a bone-deep connection with the discriminated against. Of course, I can't be sure. Also, the ending seemed ham-handed and maudlin, and I didn't think that what happened reflects what these people really would have done. Overall, Gregory Peck is always compelling even in films that aren't.

Very serious piece about silent prejudice, where the usual hallmarks of bigotry are hidden under a polished but greasy veneer of smiling good manners. Ahead of its time by decades at least, the crux of the tale interestingly happens inside of a blossoming love affair between two we-know-better-than-that cosmopolitans, ably delivered by Peck and (very underrated but nuanced and shining) Dorothy McQuire.

Back when it was released during the late 1940s, this film was really quite something. It was a serious drma which tackled the issue of prejudice, specifically anti-semitism, something that really struck a chord given the historical evetns of the years preceeding it's release. I can see why it won some Oscars (including Best Picture), but I can't really say if it was the most deserving of the award or not. It is a good movie though, although it comes across as rather tame and typical by moden standards. So, in order to really enjoy it, you just have to force yourself into the same environment that the film was made and takes place in. You can get enjoyment out of it if you don't do that, but you might not find the film to be as impactful, either. It is a tad bit boring, and I think they could have handled the issues a little better, but, given the circumstances, they really pushed the envelope for the time, and did the best they could. I do like the performances though, because Peck is as reliable and watchable as always. The others are good too, but unfortunately, the score makes everyone seem more melodramatic than was probably intended. All in all, a decent enough film that tries to explore some serious issues. Some of its relevancy has worn off, but the principles remain. If you want to see how important social and cultural issues were dealt with via film in the past, you could do a whole lot worse than this.

This is a good serious drama about persecution of Jews in modern society (of the 40s).