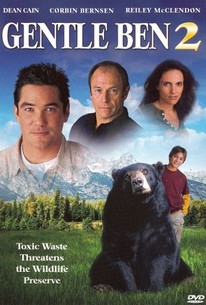 The second of two made-for-cable films inspired by the old Ivan Tors series Gentle Ben, Gentle Ben 2: Danger on the Mountain was more blatantly a "pilot" for the revival of the series than its predecessor. Dean Cain stars as Jack Wedloe, overseer of a North California wilderness preserve which serves as the home for himself, his young nephew Mark (Reiley McClendon) and a big, lovable bear named Gentle Ben. Trouble begins when Jack's headstrong friend, land developer Fog Benson (Corbin Bernsen), enters into a business arrangement with a pair of shady entrepreneurs. Intending to cultivate the land abutting Wedloe's preserve, Fog naïvely insists that his partners intend to open a natural spring-water business. By the time Fog realizes that his new cronies actually plan to drill for oil, poor Jack has been arrested on trumped-up charges and Mark is bundled off to a foster home. Not surprisingly, it is Gentle Ben who sets things right in his own inimitable bruin fashion. Gentle Ben 2: Danger on the Mountain debuted January 5, 2003 on the Animal Planet cable channel.

Critic Reviews for Gentle Ben 2---Danger on the Mountain

There are no critic reviews yet for Gentle Ben 2---Danger on the Mountain. Keep checking Rotten Tomatoes for updates!

There are no featured reviews for Gentle Ben 2---Danger on the Mountain at this time.