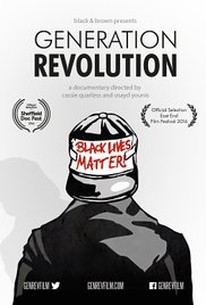 Generation Revolution brings to screen the powerful story of a new generation of black and brown activists who are changing the social and political landscape in the capital and beyond. This feature-length documentary film follows an exciting new breed of organisations as well as the young Londoners that are part of them. The London Black Revolutionaries, or 'Black Revs', have a predilection for dramatic, raucous, direct action. R Movement challenge the idea of the 'Staid and Serious' political activist and The Black Dissidents are a new organisation intent on furthering the fight against oppression along the lines of race, class and gender. The film vividly chronicles the evolution of our characters as they experience personal and political awakenings, breakthroughs and, at times, disillusionment. Generation Revolution offers a unique and original glimpse into the rewarding but difficult path that must be trodden in the struggle for personal, social and political liberation.

Sometimes this looks like a preliminary sketch for a longer and more in-depth film, but it is engaging.

A critical insight into black lives in Britain.

The passion and idealism oozes off the screen, even if it's ultimately a rather sad story.

Generation Revolution is a committed film that gives an insight into committed young people doing what they believe in against the odds.

There are no featured reviews for Generation Revolution at this time.