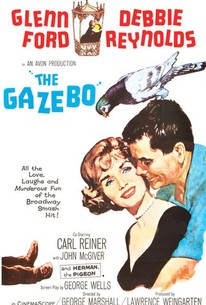 Glenn Ford stars in this genial black comedy starring Glenn Ford as Elliot Nash, a successful television writer who is married to an equally successful Broadway star, Nell Nash (Debbie Reynolds). One day a blackmailer pays Elliot a visit. He claims to have in his possession nude photographs of Nell taken during her leaner years. Elliot decides the only way out is to kill the blackmailer. After the murder, Elliot hides the body in the ground where he is planning to build a gazebo. But after Elliot's gazebo is built, the body of the blackmailer is uncovered at another location; now Elliot has to figure out whose body is buried underneath his gazebo.

Martin Landau
as The Duke

Dick Wessel
as Louis the Louse

Herman
as The Pigeon

Critic Reviews for The Gazebo

A funny offbeat black comedy based on a so-so Broadway play.

Audience Reviews for The Gazebo

This is such an hilarious dark comedy! The actors do a great job, the story is perfect for the genre, and everything just made me laugh. I recommend this movie.