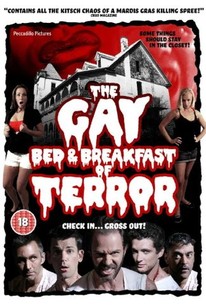 Even the most famished of travelers aren't likely to sample any "delicious" homemade muffins after catching this campy tale of a cozy bed and breakfast that happens to be run by a homo-hating hostess who makes a sport out of killing queers. The eve of the biggest gay party of the year has finally arrived, but when five couples realize that no one has made advance reservations, they make the fateful mistake of booking rooms at the Sahara Salvation Inn, a quaint little inn run by God-fearing Helen (Mari Marks) and her lovely daughter, Luella (Georgia Jean). All they were looking to do was have a little fun for the weekend, but these vacationing gay couples are about to experience the fright of their lives. They should have known by the homey decor that their evangelical Republican host was used to a more traditional clientele, though they never would have suspected that Helen was seeking to cure her daughter of lesbian tendencies through "curing" a gay man and forcing him into a union that Luella never wanted. Now, as Helen attempts to set her guests "straight" with a little help from the half-redneck/half-maggot mutant who haunts the grounds, odds are good that none of the guests will get out of the inn alive.

Jim Polivka
as Rodney
View All

Critic Reviews for The Gay Bed and Breakfast of Terror

Trash can be fun but this movie is too tedious and under-inspired to be amusing.

An indecisive mix of tepid camp and gory gross-out, "The Gay Bed & Breakfast of Terror" doesn't go far enough in either direction.

There's no joking here, only a sincere belief that anyone who isn't a sophisticated urban queer is a mouth-breathing Reagan fanatic panting to give a homosexual beatdown.

There's a fine line separating campy and cheeseball, however, and The Gay Bed and Breakfast of Terror delves far into the latter.

A fun idea given a lame, low-budget execution; one of the worst films of 2008

The best part comes right off the top as Juliet Wright sings and dances up a storm during the opening credits.

Audience Reviews for The Gay Bed and Breakfast of Terror

There are no featured audience reviews yet. Click the link below to see what others say about The Gay Bed and Breakfast of Terror!

The Gay Bed and Breakfast of Terror Quotes