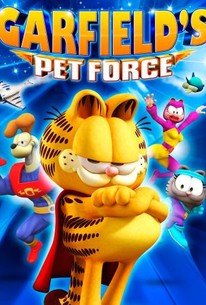 In a parallel universe the heroic exploits of Garfield, Odie, Nermal, and Arlene are the stuff of legend, but even they may be no match for the diabolical comic book demoness named Vetrix. Vetrix has hatched a plan to make everyone in cartoon world her slaves, and with an army of zombies to do her bidding, she just might succeed. One minute, Garfield and friends are enjoying a sun soaked cookout, and the next they're doing battle with a malevolent alien and her mindless zombie minions. In order to defeat Vetrix, all the comic strip characters will have to become superheroes. Sure Garfield would rather be cooking out, but when he finally realizes just what's at stake, odds are good he'll rise to the challenge. ~ Jason Buchanan, Rovi

Frank Welker
as Garfield the Cat

perhaps at best a diverting, brief trip to the cinema that will keep very young viewers happy during the wait for the big studio family films.

This brief animated feature feels like a bit of a cheap rip-off that might work as a time-filler on children's television but doesn't warrant the expense of a family trip to the cinema.

I do long for the days of the cynical, bitter Garfield of yesteryear, but I can handle this for the time being.

There are no featured audience reviews yet. Click the link below to see what others say about Garfield's Pet Force!