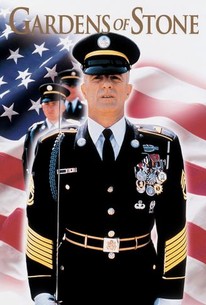 Set during the Vietnam War, this film follows the life of the group of soldiers assigned to duty at the Arlington National Cemetery. When the anxious, young Pvt. Jackie Willow (D. B. Sweeney) is stationed at Arlington instead of being sent to war overseas, he is befriended by Sgt. Clell Hazard (James Caan), a career soldier who can't find it in himself to support the war. The friendship of his fellow soldiers and the love of his girlfriend, Rachel Feld (Mary Stuart Masterson), however, may not be enough to dissuade Jackie from joining the war overseas.

Joseph A. Ross Jr.
as General

Critic Reviews for Gardens of Stone

Seems to take its name not so much from the Arlington Memorial Cemetery, where much of the action takes place, but from the stiffness of the characters it portrays.

There's a pervasive and worrying sense of the central issues being gently but undeniably fudged.

The most important missing ingredient is Mr. Coppola.

A handsome but fragmentary film that can't decide which story to tell.

Every moment is right, and yet the film as a whole is incomplete.

There's a curious ambiguity in Coppola's feelings about the soldiers and their life.

For want of a timeless message on the horrors of war, Coppola does indeed tell a compelling story of one man's battle on the homefront. Caan gives a stunning performance after a five-year absence from the movie screen.

Subdued war drama on life on the home front during the Vietnam war.

Unjustly underrated upon its release, Gardens of Stone is a quiet, respectful film filled with emotional power, exceptional acting (especially by Caan), and technical virtuosity.

Subtle and elegiac, Coppola's anti-Vietnam War meditation is one of the director's most misunderstood films.

Francis Coppola's 1987 Vietnam meditation was his best film in a while, though it's still something less than satisfying.

Audience Reviews for Gardens of Stone

It's taken 20 (plus) years but Coppola's much maligned take on the effects of an unpopular war seems to have found it's relevance.