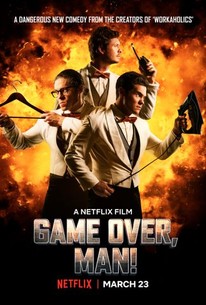 During a star-studded Los Angeles party, three zeroes become heroes (sort of) when the hotel they work at is taken hostage by bad guys. From the creators of Workaholics, this action comedy comes locked and super loaded on March 23.

News & Interviews for Game Over, Man!

View All Game Over, Man! News

Critic Reviews for Game Over, Man!

Try as one might to rise above the juvenility of it all, it's ultimately hard to be mad at something that manages to cram Mark Cuban, a fearlessly full-frontal Devine...and musician Shaggy forced at gunpoint to sing It Wasn't Me into the same production.

With its inexplicable combination of phallic revulsion, fascination, and revulsion at its own fascination, this wretched film hates itself more than we ever could.

This almost laugh-free comedy ... is distinguished by a relentless level of outrageous yet strangely listless vulgarity.

"Boys will be boys," says their boss in an early scene, laughing off their unprofessional behavior. But their conduct does not improve, and neither does this action comedy riddled with pop culture references.

Game Over, Man! is grotesque, violent, insane and offensive-in other words, it's kind of exactly what you'd expect from a 'Workaholics' movie unrestricted by basic cable censors.

The downside to generating original content for Netflix is that there isn't any oversight whatsoever; no one to point out how many of the jokes aren't working.

Thankfully, the movie does clock in at less than 100 minutes-it could've been a lot worse.

Game Over, Man! is dull, plodding, not particularly funny, and it squanders an abundance of proven comedic talent by leaning into crass bits that don't generate nearly enough laughs.

Game Over, Man doesn't reinvent the wheel nor does it try to, but the impressive array of clever quips and jocular chemistry between the three leads combine to create a cozy Friday night power down comfort watch.

Still, Game Over, Man! works best when it's not trying to be even remotely deep.

There's just enough inspired insanity here to please Workaholics die-hards, even if fans of actual Die Hard might be left a touch underwhelmed.

Audience Reviews for Game Over, Man!

It is a tough task of balancing black humour and a coherent plot line. Hot Fuzz successfully balanced this blend, but Game Over, Man! cannot stop a one joke premise from feeling too much. Great central characters and playful banter, I was on board for the humour and cameos. What let the film down was the excessive plot device and one liners that don't come off. This was an interesting choice for the creators and I only hope they bounce back with something else. 19/05/2019

Our favorite Workaholics have moved on from the small screen over the last two years since the series wasn't renewed. Adam DeVine, Anders Holm, and Blake Anderson used Game Over, Man to reprise these characters (albeit in a slightly deviated version) for one last time on the big screen. What's fun is it gives fans like us a chance to see these three knobs run around in a different setting instead of an office, but to also wish them a solid farewell should they never reprise them again. Game Over, Man isn't new or smart or engrossing, but it is stupid, funny, and ridiculous. Right down our most trusted trio's alley. The movie is a clear satire of Die Hard right down to mimicking characters specifically in line with Die Hard's. Neal McDonough steps in for Alan Rickman. Sam Richardson is the overtly confident black IT hacker. The parallels are unmistakable. But where this movie really goes off the hinges is the side actors. You've got Steve Howey (from Shameless) as a gay but thoughtful murdering henchmen. Aya Cash as a 'yes' woman to her boss Daniel Stern (from Home Alone fame) as a big swinging owner of the hotel. Everyone is just so outrageous with their characters that you cannot help but be miffed at how silly everything is. I'm not sure this falls under the stoner movie category as much as it does the parody action film category, but it should still satiate anyone looking to blindly pop on Netflix to pass an hour and a half. Most Workaholics fans will see this, if not all, thanks to the direction from Kyle Newacheck (Karl). Keeping the gang together is really the most important virtue.

I'd much rather watch any randomised episode of Workaholics, where the budgets may be smaller, but at least every now and then a joke will land.