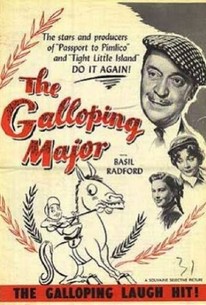 Basil Radford is cast superbly to type as The Galloping Major. The story concerns the efforts by retired Major Arthur Hill (Radford) to purchase a valuable race horse. He manages to attain financial backing from 300 fellow racing enthusiasts--and then messes things up for all concerned by buying the wrong horse. Persevering, Major Hill enters the steed in the Grand National, whereupon the horse disappears on the eve of the big event. The comic frustrations faced by the Major and his creditors are played effectively for light chuckles rather than belly laughs. The cast includes such polished farceurs as Hugh Griffith, Joyce Grenfell (a favorite of director Henry Cornelius, as witness Genevieve), Sydney Tafler and Alfie Bass.

Raymond Glendenning
as Himself

Bruce Belfrage
as Himself

Critic Reviews for The Galloping Major

Funny in spots, but hardly up to the level of its yeasty predecessors.

There are no featured reviews for The Galloping Major at this time.