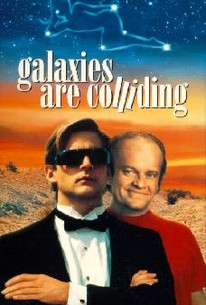 This technically polished debut feature follows a young Los Angeleno's descent into madness and journey back again. As the film opens, he is wearing a tuxedo and is walking zombie-like through the Mojave Desert. In mock-documentary style, his relatives recount how he went wonky on the day he was to have gotten married. His relatives all believe he was killed on that day by being on an Air Force target practice field when guns and rockets were firing. Meanwhile, he is encountering one eccentric desert dweller after another, including an Eastern European woman who seems to believe that the fastest way to stardom is to sleep with every willing man in the state of California who crosses her path.

Critic Reviews for Galaxies Are Colliding

There are no critic reviews yet for Galaxies Are Colliding. Keep checking Rotten Tomatoes for updates!

There are no featured reviews for Galaxies Are Colliding at this time.