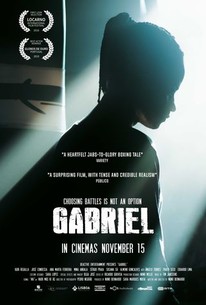 GABRIEL is an emotional boxing drama about a young adult trying to find his true identity. Set in the present day and shot in one of the toughest neighborhoods in Lisbon, Olivais, GABRIEL tells the story of a young Cape-Verdean fighter who, after his mother dies, travels to Portugal to find his father, a former boxing champion. In this pursuit, Gabriel discovers the past of his father and learns that his future rests upon the decision to enter a dangerous combat.

Regalla's soulful performance is the main reason to watch.

There are no featured reviews for Gabriel at this time.