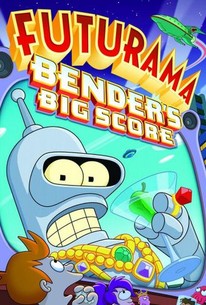 RT on DVD: A Warm Slice of Waitress, A Side of Futurama, Hold the Lindsay Lohan Career Killer
Director Dwayne Carey-Hill and Producer Claudia Katz on Bender’s Big Score: The RT Interview

I can see why so many fans were created in the short run of this TV show. As I watched and got accustomed to this universe, the laughs really kept coming.

Toss in the aliens, the last act space battle, the constant references to other sci-fi signposts, and the solid voice acting, you've got a flawless stand alone package that perfectly preserves everything that made the series a woefully unappreciated gem.

a giant 90-minute in-joke with the fans

The movie employs all of the hallmarks that has made the show such a cult favorite. Amidst this, the movie retains its keenness of observation and sense of the profound.

Funnier than most theatrical-release comedies -- and yep, that includes The Simpsons Movie.

A terrific present for series fans, and a giddy bit of sci-fi spoofery that even newcomers can enjoy.

A return to form for the sci-fi comedy, with perhaps a bit more confidence. The story is a brilliant time travel adventure, that makes way more sense than, say, Southland Tales, and rewards longtime fans.

Futurama is definitely more tolerable in small intervals, like the series episodes where this stems from, but there is enough shenanigans happening in this film to fill the allotted time. Time travel is heavily used in the plot details; sure, there are always questions and uncertainty on this subject, but this picture runs with it and turns it into an amusing story.

There are many pass episode throwbacks to be seen. Whether it is in the jokes or character cameos, Futurama: Bender's Big Score knows how to have fun. On top of that it even blends it all with some seriousness.

The character voice work is solid. Billy West, Katey Sagal, and John DiMaggio get the job done with their assigned personifications.

All that's left to say is that Futurama: Bender's Big Score is a successful feature for its targeted audience.

Easily the best of the four straight to DVD movies.

Just when you thought it was safe to watch something else! Not so funny and nothing compared to family guy or the simpsons movies. It was still entertaining because of the things they come up with these days but that's about it. Hermes Conrad does a roll call of the Planet Express crew. Unfortunately, after completing it Professor Farnsworth immediately fires them - it turns out the main delivery network, the Box Network (a thinly veiled stab at the Fox Network), canceled their contract two years ago. However, a regime change suddenly occurs and the crew's jobs are reinstated. The Professor also delightfully describes how the network executives were also painfully killed, crushed and turned into an all purpose powder. The crew celebrate with music and limbo dancing. Hermes, boasting of his own abilities, shows off by limboing underneath a razor sharp sword. Basking in his success, he is almost immediately decapitated by another sword, and his headless body finds itself crushed underneath the Planet Express ship. While his body is being repaired, Hermes is forced to live as a head in a jar, and his wife LaBarbara leaves him for her ex-husband Barbados Slim. Meanwhile Leela hits it off with a head museum employee named Lars, much to Fry's chagrin. At their first delivery to the Nude Beach Planet, Fry is surprised to learn that he has a tattoo of Bender on his buttocks. Meanwhile, Bender, Amy and Leela sign seemingly innocuous petitions for three alien nudists. In the process they give them their email addresses, eventually swamping everyone at Planet Express with spam. The Professor is caught unawares by a lottery scam and soon discovers that the aliens have taken control of Planet Express. Bender is also infected by an obedience virus planted by the aliens, and does their bidding. The aliens, who have the ability to sniff out information, discover Fry's tattoo and realize it contains a binary password that allows them to conjure up a sphere that allows them to travel back in time. Although Nibbler and the Nibblonians try to stop them, as any use of the sphere could tear apart the fabric of space, they are quickly defeated and the aliens use Bender to go back in time to steal the treasures of the past. They also discover that while temporal doubles are created when two or more of the same person exist in the same time, the double is ultimately doomed to prevent a potential paradox from occurring. As the aliens continue to steal from the past and scam the rest of Earth, Leela and Lars' relationship builds and eventually he proposes marriage. Heartbroken, Fry discovers that, after having stolen all the world's treasures, the aliens want to kill him to destroy the tattoo, so he goes back to the year 2000 to both escape them and his memories of Leela. However Bender is sent back to kill him. In a series of events, Fry returns to the 31st century by freezing himself while his temporal double, created after another time travel trip, stays on in the 21st century. The double ends up befriending a Narwhal and becomes a marine biologist, but is apparently killed by Bender when his apartment explodes in 2012. Meanwhile the original Fry gets rid of the tattoo and plans to disrupt Leela's wedding to Lars. Although his plan does not work, Lars ends up canceling the wedding anyway after witnessing Hermes' new body (whom he had stolen from his own temporal double) mangling itself again. Eventually the aliens take over the Earth and evict everyone to Neptune. There, the crew teams up with Robot Santa and Zapp Brannigan to retake the Earth. A space battle ensures, and the aliens are destroyed by one of the Professor's doomsday weapons. Fry, realizing that Leela and Lars should be with each other, gets them to reconcile.. Unfortunately the reunion is short lived when a surviving alien confronts the trio, and Lars sacrifices himself to save Leela and Fry. His video will reveals that Lars is actually Fry's temporal double who stayed on in the 21st century. It is revealed that the explosion which supposedly killed him just burned off his hair and changed his voice into Lars. Knowing that they will get together in the future, he freezes himself until the 31st century and gets a job as a feeder at the head museum, where he'll meet Leela. Unfortunately, after witnessing the fate of Hermes' temporal double's body he realizes that he too is doomed and called off the wedding. After bidding Lars farewell at his funeral, Bender has to make one last trip back in time to 2000 to put the tattoo on Fry and set everything right. Unfortunately he discovers the many temporal doubles of himself, who almost immediately begin self destructing, causing a large rip in the fabric of space.

Geez, Futurama, what a way to completely rip out my heart.... I've always had such a soft spot for Fry and really liked the story by the end. It was a little strange to begin with.