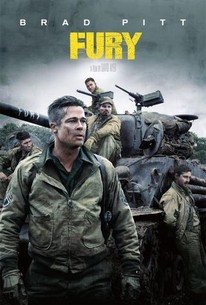 Critics Consensus: Overall, Fury is a well-acted, suitably raw depiction of the horrors of war that offers visceral battle scenes but doesn't quite live up to its larger ambitions.

Critics Consensus: Overall, Fury is a well-acted, suitably raw depiction of the horrors of war that offers visceral battle scenes but doesn't quite live up to its larger ambitions.

Critic Consensus: Overall, Fury is a well-acted, suitably raw depiction of the horrors of war that offers visceral battle scenes but doesn't quite live up to its larger ambitions.

April, 1945. As the Allies make their final push in the European Theatre, a battle-hardened army sergeant named Wardaddy (Brad Pitt) commands a Sherman tank and her five-man crew on a deadly mission behind enemy lines. Outnumbered and outgunned, and with a rookie soldier thrust into their platoon, Wardaddy and his men face overwhelming odds in their heroic attempts to strike at the heart of Nazi Germany. (C) Sony

Pitt, who at 50 still looks great with his shirt off, has the gruff charisma to play a dauntless soldier with killer courage and a vestigial streak of humanity.

It's an "unflinching" account of war -- "unflinching," in quotes, because every moment of the film is composed to grind your face into the muck and be proud of itself for doing so.

Pitt is at the top of his game, playing a man who has forgotten whatever he used to be and has wholly embraced his role in this war.

Led by Pitt, who sublimates his persona so deeply into Wardaddy that you can forget about his movie star baggage, the cast is exceptional.

There's no quick cutting, handheld camera designed to disorient. Ayer builds and releases tension the hard way, with careful sequences that efficiently lay out who is doing what to whom.

It all feels horribly hollow and unnecessary.

Sometimes pretentious and sometimes straining a bit too hard for an extra degree of pathos, it's nonetheless an arresting film that's often unsettling and unpredictable.

If you asked him, chances are Ayers would claim that the meat of the film, the last 40 minutes, was "set up" by the methodical pauses preceding it. He'd be wrong, but that's probably what he'd say.

The scenes that attempt to humanize the protagonists, while also portraying the darker side of war, are too contrived. But the raw battle scenes are riveting...but you cannot ignore the script's moral high ground.

Fury will stay with you, and will long be remembered as one of the best and most authentic character-driven feature films on WWII.

As far as the look and atmosphere go, this WW2 action drama feels almost like a Saving Private Ryan spin-off. The action sequences are impressive, especially the decision to color the flying tank bullets, giving them almost a laser look, is fresh and cool. There are long calm sequences of showing the horrors of war through a different, more personal perspective. And then again there are really gruesome deaths. Sadly, the showdown follows the tropes of war dramas by the numbers and is accordingly predictable. Just like in Suicide Squad, director Ayers seems to enjoy fights in the mist (or smoke), obscuring the view. That's not particularly impressive. Still, overall a pretty strong movie with plenty of memorable scenes.

Time sure flies when yer having fun, eh? Who knew that Brad Pitt was old enough to play the grizzled squad leader who cares about his guys trope? That's the traditional John Wayne role, yah? Well Pitt steps easily into the old shoes and leads his boys into kicking mucho Kraut butt glory. The only real difference in this "war is hell" send up is that the action happens in a tank, which could've been explored further but what the hey. Everybody does their job compentently and there are no complaints from me. The best scene actually happens in the apartment of two scared German women caught in the American advance.

Relentlessly grim but too what purpose?