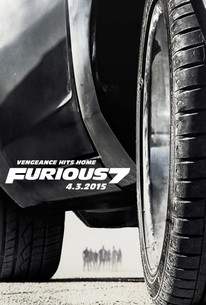 Critics Consensus: Serving up a fresh round of over-the-top thrills while adding unexpected dramatic heft, Furious 7 keeps the franchise moving in more ways than one.

Critics Consensus: Serving up a fresh round of over-the-top thrills while adding unexpected dramatic heft, Furious 7 keeps the franchise moving in more ways than one.

Critic Consensus: Serving up a fresh round of over-the-top thrills while adding unexpected dramatic heft, Furious 7 keeps the franchise moving in more ways than one.

The fact that Furious 7 is messier than any of the past installments is more than mitigated by its grandeur. "Dom, cars don't fly! Cars don't fly!" Brian yells before its biggest stunt. Furious 7 makes you believe they can.

The director, James Wan, sends cars repeatedly airborne and seems himself to marvel at the results; the movie's real subject is the stunt work, but its stars' authentic chemistry lends melody to its relentless beat.

As zippy, playful and amiably preposterous as the best of the previous models.

"Furious 7" could have come across as ghoulish, but it's not until the very end that we're reminded of Walker's fate, and the filmmakers handle it with taste and respect.

Who would have thought that a series addicted to the high of movement could also summon a solemnity that leaves you moved?

The only grace note in this otherwise determinedly graceless movie is the classy way Walker's exit is handled. To say more is to say too much.

If you leave logic at the door, buy the biggest popcorn bucket the theater has to offer, and want to have fun- Furious 7 is the film that will take you on the ride you're looking for.

Convoluted as the story is, the way they say goodbye to Paul was well done and really very poignant.

"Do we really need another Fast and Furious movie?" No. No we do not. We also didn't need to land on the moon. Nor did we need to create the 1967 Ford Mustang. We did it because it was awesome and we could, dammit.

We want these films to go on forever, and perhaps they will; but, for now, this is a fine film to ride off into the sunset to.

If this is the end of an era, it's ended on a high note.

Phil W. Bayles
One Room With A View
View All Critic Reviews (267)

Quite simply is the Fast and Furious franchise, the best, worst movies ever made? I believe they are. The latest instalment Furious 7 is full of unbelievable action, choppy acting and chock full of clichéd dialogue. That's not to say these films don't look great, because they do! These unrealistic action pieces are so beautifully shot and executed much to the credit of James Wan (The Conjuring). Another highlight of the film and franchise as a whole is the diverse cast, making it easily accessible to a wide audience. As much as I wanted to enjoy this film, being Paul Walker's last film, I cannot give it a glowing recommendation. However, this doesn't mean you shouldn't see it, its a great two hours of brainless fun and thrills and the touching montage to Paul Walker at the end is well worth the admission and possible tears. However, if you're looking for realism and a solid story this is not your movie. 2/5

Although the series began with the emphasis on racing fast cars, with a bit of bimbo tail showcased between races to hold yer interest, the racing angle has been chucked here to lean into a James Bond-like adventure (with the pre-requisite bimbo tail showcased every now and then lest one thought they forgot where they came from). Jason Statham is the conflict, as if they decided to give the fans The Transporter versus The Fast and The Furious fight that they've been clamoring for, and it works, but only because they move from one crazy action set piece to another, each bigger than the last, with hardly a breath taken in between. The film only lags when the actors actually have to talk to one another, and then everyone looks nervous. No worries, there's more action coming in just a second. You will believe that cars can fly, so often are cars in the air here. While I wanted to complain that everything was just plain unbelievable and meant solely for teenagers, the adults I saw it with totally overlooked these deficits and wholeheartedly enjoyed the thing. I suppose that in the days of a successful movie series based on a guy flying around in an iron suit being okay then my concerns about something reality based are merely insubstantial.

An insane collection of three huge action scenes with little to no basis in the real world. Entertaining but also incredibly shallow and somewhat silly.