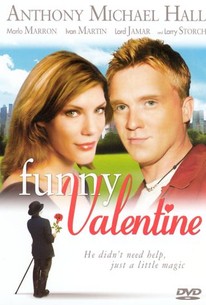 A street performer whose luck in love could best be described as abysmal is subjected to a complete image overhaul by his womanizing best friends in a laid-back romantic comedy about love in the city starring Anthony Michael Hall and directed by Jeff Oppenheim. Despite his kind nature and keen sense of humor, street-busker Josh (Anthony Michael Hall) just can't seem to land a date. Though things start to look up for Josh when his worldly buddies Tim (Lord Jamar) and Sean (Ivan Martin) vow to share their secrets of seduction with Josh, clean up his image, and place a personal ad to help him find a date, Josh soon begins to realize that he may have already found the love he is looking for in working single mother Doreen (Marlo Marron).

Phillip B. Fahey
as Richard

There are no critic reviews yet for Funny Valentine. Keep checking Rotten Tomatoes for updates!

There are no featured reviews for Funny Valentine at this time.