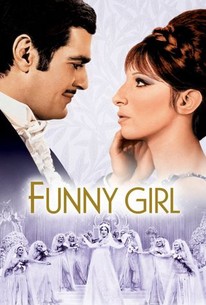 "Hello, gorgeous!" was Barbra Streisand's first comment to the Oscar statuette which she won for her performance in this biopic of entertainer Fanny Brice. This is also her first line in the film itself, the catalyst for a movie-long flashback. Repeating her Broadway role, Streisand stars as legendary comedienne Brice (1891-1951), whose life until the mid-1920s is romanticized herein. A gawky New Yawker, Brice fast-talks her way into show business, certain that she's destined to be "The Greatest Star." Hired as a "dramatic" singer by impresario Flo Ziegfeld (Walter Pidgeon), Brice defies orders to play it straight, turning a "Beautiful Bride" tableau into a laugh riot by dressing herself up as an extremely pregnant newlywed. The stratagem turns Brice into an overnight star and the toast of Broadway. But all is not roses for Brice, especially in her turbulent private life as the wife of big-time gambler Nicky Arnstein (Omar Sharif). Nicky at first finds it amusing to be referred to as "Mr. Brice," but he begins to resent his wife's fame and fortune and starts taking foolish risks with other people's money. The film was nominated for 8 Oscars, including Best Picture and Kay Medford for her portrayal of Brice's mother, Rose. Funny Girl was produced by Ray Stark, Brice's real-life son-in-law, who had enough material left over for a sequel, 1975's Funny Lady. ~ Hal Erickson, Rovi

It's hard to think of Funny Girl, in fact, apart from Barbra Streisand. She is the life force. Director William Wyler simply drapes the opulent show around her.

When she is singing--in a marvelous scene on roller skates--when she throws a line away, or shrugs, or looks funny or sad, she has a power, gentleness and intensity that rather knocks all the props and sets and camera angles on their ear.

Streisand is stunning, but the film is a trial, particularly when the music disappears somewhere around the 90-minute mark and all that's left is leaden melodrama.

This extended Streisand Special has done absolutely nothing to correct the flaws in the Broadway original.

Barbra Streisand in her Hollywood debut makes a marked impact.

Well worth watching, even if most later Streisand movies aren't.

In Barbra Streisand Funny Girl thumps down an ace.

William Wyler's adaption of the stage musical is transformative for many millennials. Whether wearing a hijab, sporting a yarmulke, or bareheaded, my students embrace Streisand's Brice and the star/character's professional chutzpah & insecurities.

In lesser hands this would fall flat because nothing is written to comfort the supporting players. They are extras with names and blurred faces.

A fine movie musical and a nice reminder of the time when Streisand was a talent rather than a 'phenomenon'.

Few film debuts in the 1960s were more auspicious than that of Barbra Streisand in Funny Girl.

Epic freaking musical about a singing comedienne wedging her way into her big break. The beginning is a bit slow, and I tired of Fanny's repetitive self-deprecation about her lack of traditional beauty, but Barbra Streisand is sassy and ballsy, and my word, is Omar Sharif not the most dashing and earnest paramour? He says "I love you" so shyly yet tenderly! Nicky's love and admiration are so soaring, and that's what makes the main relationship conflict of Fanny outgrowing Nicky and the show-stopping number "My Man" all the more tragic in a mere mortals sort of way.

Despite a tight and coherent film score, good singing, and a pleasantly avuncular performance by Pidgeon, "Funny Girl" is a real snoozefest. The only thing you'll find funny about this film is that you can't get your ticket refunded after you fall asleep in the middle of it.

I was surprised at how relevant this story still is - take a look in the news lately and see how many columnists are talking about our changing work world, the one in which "feminine" skills are much more in demand and as a result, men have begun to feel insecure and less confident when they aren't the provider they've been socialized to be. Nick Arnstein (Omar Sharif) turns increasingly to gambling in his attempt to keep up with his love (Barbra Streisand)'s success. I found his story to be almost the more interesting, intermittently updated though it was. Before seeing this, I wrote it off as something old-timey for Broadway fans that plays all too well in the Borscht Belt, but it's not without its charms. A cliched story of a rise to fame, sure, and full of music that I don't really like, and a bit on the long side - there's a serious lull late in the second hour - but you shouldn't ignore the fact that William Wyler helmed this film. It's well-shot and funny and inspiring, on the whole, and a justifiable classic that's worth seeing once.

Whyyyyy is this movie so long? There's nothing I dislike more than an overstuffed musical. Babs is cute, sometimes.