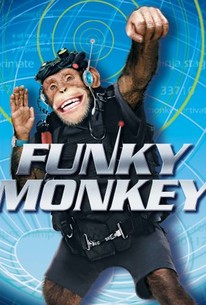 When a rogue CIA agent and a kung fu fighting chimp named Clemens stage a daring escape from a top-secret government testing facility, the stage is set for an adventure that's sure to please the entire family in this primate crowd-pleaser featuring Matthew Modine, Seth Adkins, and Roma Downey. Appalled at the conditions under which chimpanzees are transformed into kung-fu fighting soldiers in a high-tech government lab, sympathetic trainer Jack McCall (Modine) smuggles experimental test subject Clemens out of the lab -- but not before being noticed by the nefarious henchmen who guard the facility. As the government agents close in, Jack and Clemens seek refuge in the house of single mother Megan Dean (Roma Downey) and her young son, Michael (Adkins). When the escape plan goes sour and Clemens is taken back into custody, it's up to Jack and his new friend Michael to bust their hairy pal out of primate prison!

There are no critic reviews yet for Funky Monkey. Keep checking Rotten Tomatoes for updates!

There are no featured audience reviews yet. Click the link below to see what others say about Funky Monkey!