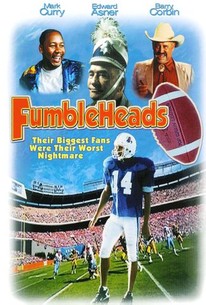 Hell hath no fury like a football fan scorned in this sport-oriented comedy. The city of Quimby Falls is already going downhill when the owner of the local professional football team, the Buzzards, decides to bail out of the sinking ship and move the franchise elsewhere. But the team's most loyal fan, Charlie Atwater (Edward Asner) -- who even led a marching band to play at the Buzzards' home games -- refuses to take this lying down. After patiently waiting for seven years for the team to return, he decides that it's time to take drastic action. Charlie and his buddies decide to kidnap the team's owner (Barry Corbin) in order for force him to bring the Buzzards back to Quimby Falls. The kidnapping proves disastrous, so they decide to take a slightly different approach and instead abduct the team's quarterback, Fly Walker (Mark Curry).

There are no critic reviews yet for Fumbleheads. Keep checking Rotten Tomatoes for updates!

There are no featured reviews for Fumbleheads at this time.