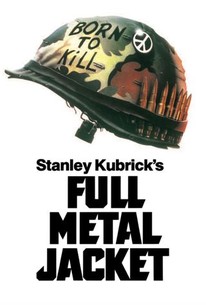 Critics Consensus: Intense, tightly constructed, and darkly comic at times, Stanley Kubrick's Full Metal Jacket may not boast the most original of themes, but it is exceedingly effective at communicating them.

Critics Consensus: Intense, tightly constructed, and darkly comic at times, Stanley Kubrick's Full Metal Jacket may not boast the most original of themes, but it is exceedingly effective at communicating them.

Critic Consensus: Intense, tightly constructed, and darkly comic at times, Stanley Kubrick's Full Metal Jacket may not boast the most original of themes, but it is exceedingly effective at communicating them.

Stanley Kubrick's return to filmmaking after a seven-year hiatus, this film crystallizes the experience of the Vietnam War by concentrating on a group of raw Marine volunteers. Based on Gustav Hasford's novel The Short Timers, the film's first half details the volunteers' harrowing boot-camp training under the profane, power-saw guidance of drill instructor Sgt. Hartman (R. Lee Ermey, a real-life drill instructor whose performance is one of the most terrifyingly realistic on record). Part two takes place in Nam, as seen through the eyes of the now thoroughly indoctrinated marines. Ironically, Full Metal Jacket was filmed almost entirely in England. ~ Hal Erickson, Rovi

If his considerable achievement in this long- awaited film falls short of his Olympian standards, there is a reason that ought to give Kubrick some satisfaction. The world has caught up with Kubrick and what he has to say.

It may seem too spare, too clinical, its moments of war even too familiar for some. But, aiming for minds as well as hearts, Kubrick hits his target squarely.

What gives this story its power is not really its originality, but the relentlessness of Kubrick's black-comic vision and the tightness of his focus.

There is a real fear at the heart of this monstrously armored, desperately defensive film.

It's a great piece of filmmaking, diminished only by a second act that fails to live up to the first act of the Marines in training.

Full Metal Jacket is a master study in indoctrination and fundamental identity shifts. Every moment of the film builds and builds on Kubrick's ideas...

We look to the director for some judgment, or even an indication of his opinion, as to whether his carnage artists are born or made; but we don't get it.

An electrifying opening segment that could stand alone as one of Kubrick's great films, except it's only about 45 minutes long.

Full Metal Jacket, produced, directed and co-written by Stanley Kubrick, is not an easy film to watch, but from the first frame to the last, it is a riveting one.

One of the classics of war cinema, it's not nearly as good as its legend suggests. But it's pretty good.

[Kubrick's] genius, and perhaps burden, is to see the insanity in us all and to make it seem so terrifyingly normal.

While certainly qualifying as quality film-making, Kubrick's Vietnam entrée also shows signs of aging. Much of the dialogue has that grammar school feel of trying one-ups-manship that was tiring in grammar school (except for the remarkable Lee Ermey, who stills radiates like nuclear meltdown). Still a work worthy of your time.

A powerful and cynical film that portrays with dark humor and acid criticism the dehumanizing side of war, with R. Lee Ermey and D'Onofrio stealing the show in the most memorable scenes. Still, the second part never achieves the level of excellence of the first half, turning into just another war movie.

Dark humor, sharp dialogue and R. Lee Ermey's terrifyingly excellent performance. Full Metal Jacket is a gripping portrayal of the dehumanization and transformation of the US soldier in the midst of the Vietnam War. Kubrick's tactical direction and nasty-good production on this film is one of his best. 5/5

Stanley Kubrick turns his attention to Vietnam in this bleak and emotionally draining representation of a conflict that was the perfect subject for which to turn the accepted war movie cliches on their heads. It throws you in the deep end of marine boot camp where conscripts are stripped of all sense of individuality to be turned into killing machines, a process ferociously undertaken by one of the most evil and hateful characters you're ever likely to see on screen. You do not grow to admire and respect this man as you do in most militaristic flag wavers; he is a ruthless sadist who punishes every tiny error with the kind of physical and emotional abuse that would be deemed unconscionable in any other environment. He even holds up a mass murder and assassin as figures to be admired and only considers private Pile, the subject of his systematic humiliation, worthy AFTER he has reached psychological breaking point. Once the action shifts to Vietnam, Kubrick's unsentimental documentary style places you in the thick of the battlefield where the slightest hesitation, act of compassion or humanity is punished by death and he makes no attempt to emotionally manipulate or preach simplistic anti-war messages. In his inimitable style he exposes the ugly truth about war; without their monstrous drill sergeant's brutal teachings they wouldn't have lasted 5 minutes in this environment so within the context of war, cruelty is RIGHT. Cruelty WORKS. And any society that was built on militarism has this fact as its foundation; even one whose figurehead is a lovable cartoon mouse.