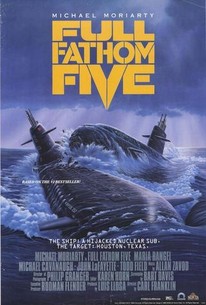 In this action film, when Panama is threatened by an invasion of U. S. Troops, a group of radical Panamanians capture a nuclear sub from the Russians and station themselves outside of Houston, threatening to blow the city up unless the Americans meet their demands. It is up to American submarine commander McKenzie (Michael Moriarty) to stop the Panamanians and save Houston from annihilation.

Orlando Sacha
as Barrista
View All

There are no critic reviews yet for Full Fathom Five. Keep checking Rotten Tomatoes for updates!

There are no featured audience reviews yet. Click the link below to see what others say about Full Fathom Five!