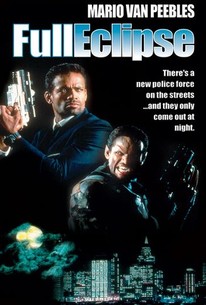 This interesting action-horror film stars Mario Van Peebles as a tough cop who becomes the latest recruit in a secret faction of the police which not only operates on the fringes of the law, but is also composed entirely of werewolves. Horror fans who choose to embrace the fundamental goofiness of this premise will find an interesting blend of hyperkinetic John Woo-style action, comic-book fantasy, and good old-fashioned monster mayhem. Inducted into the league of lycanthropic lawmen by one of its more aesthetically pleasing members (Patsy Kensit), Van Peebles partakes of a drug which, like the others on the squad, brings out his animal instincts and endows him with superhuman strength and agility (as well as some unsightly body hair). Despite some touches of black comedy, director Anthony Hickox plays the material fairly straight, with a strong emphasis on slick, tightly edited action sequences. Originally produced for HBO, this was later released on video with some of the gorier footage restored.

Lawrence Mortorff
as Sergeant at Club

Mel Winkler
as Stratton
View All

Made in the early 90's which coincidentally was the peak of John Woo's highly stylistic movies, and you can clearly see how his high flying, double handed gun diving, slow motion action fest was influenced by Woo. Its got his artistic finger prints all over it in concept, as the director has obviously gone down the oriental route here. If you take elements from 'The Matrix' 'Blade' 'From Dusk Till Dawn' 'Underworld' 'Priest' etc...you do get an idea of what this film is like. With slick cool visuals and action (heavy on the Woo factor), mixed with the dark brooding fantasy genre that has been so highly exploited in recent years thanks to the big improvements in effects, and you get this early offering. I'm sure this film has helped others film makers somewhere down the line over the years. The film is also influenced by the Marvel characters of the 'X-Men', mainly 'Wolverine', again obvious by the werewolf claws that pertrude from the knuckles. Even their special tactical suits look a bit 'X-Men-ish' and on the cheap side I might add, what are all the straps for exactly??. In short this film is a heavy mix of many ideas that we all know of nowadays but amazingly this film was probably one of the first to do it in the fantasy genre. The only down side here is firstly the cast which are a bunch of nobodies really. Mario Van Peebles has always been a bit of a D-list action man really, never made anything big, doesn't quite have the looks or the acting skills and tends to end up in poor equivalents of better films. Alongside him are some other actors who are faceless basically, accept for Patsy Kensit who again isn't really a proper actress, just a big name at the time with a tight ass and blonde hair, nothing more. The only good player here is of course the ever evil Bruce Payne who simply cannot fail in delivering the perfect slimy devilish bad guy with those eerie bewitching features of his. Casting him was a master stroke of genius. The other issue is the fact the film was made for TV, which means the budget seems to have been low, which equals slim pickings on the cast and visuals. Now don't get me wrong the visuals are nicely done with some great makeup effects (although the finale takes a turn for the laughable) but with a slightly better budget this could have looked that much better. The low budget does add a gritty realism of course but certain things clearly need a boost, some sets, some stunts, the costumes are pretty low key and some set pieces do look fake (the werewolves claws look terribly fragile to me). There are some plot questions I can't quite work out. The main bad guy (Payne) and his team are invincible in werewolf form from everything its seems accept silver, and an eclipse makes them invincible to that as well. But why the need to follow eclipses around the country for one night of silver protection when 99.9% of the time they are invincible anyway and no one even knows about their lycanthropy silver problems anyway. Plus Payne's character always kills off his fellow werewolf team members before moving to the next city, just not sure why. And finally his mission, the plot for him in the film, what actually is it?? seriously he doesn't seem to have a goal accept to wipe out all crime, but doesn't that make him a good guy?. Sure he's doing it in a supernatural way but he's getting the job done right haha. This film is ripe for a remake I must admit, the idea is killer and could be done with werewolves, mutants or vampires. The only thing is it wouldn't be as fresh or original as this film was when it came out. As we all know these days these types of films are ten a penny and I'm sure many would just scoff at the idea behind this as an 'Underworld' clone set within the police force.