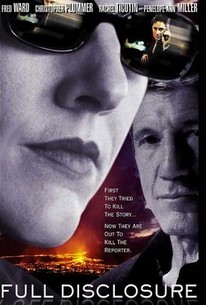 Hard-drinking newspaper reporter John McWhirter (Fred Ward) finds himself in the middle of a messy political assassination plot when he is compelled to keep in his house an on-the-lam Palestinian operative, Armiti Khalq (Rachel Ticotin). McWhirter, who is being heavily pressured by his editor (Virginia Madsen) to come up with a scoop, has no choice but to keep the woman safe as a payback to two old friends he apparently betrayed when they were university radicals during the turbulent 1960s. The overreaching FBI bureau chief, Robert Lecker (Christopher Plummer), is anxious to find the woman and send McWhirter and his companions away -- unless they happen to die first. Meanwhile, a manic hit woman, Michelle (Penelope Ann Miller), discovers Armiti's hiding place and closes in for the kill, just as McWhirter returns home. ~ Buzz McClain, Rovi

Where else [but on the straight-to-video scene] could someone like Fred Ward be cast in a leading role?

There are no featured audience reviews yet. Click the link below to see what others say about Full Disclosure!