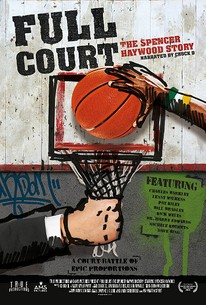 Spencer Haywood went from picking cotton in rural Mississippi to being inducted into the Naismith Memorial Basketball Hall of Fame. Along the way he won Olympic gold, married one of the most famous supermodels in the world and dominated professional basketball. But he had to fight every step of the way - for his civil rights, against addiction and even against the NBA itself. In 1970, young Haywood challenged the NBA's "four-year rule," which stated that players could not enter the league until they were four years removed from high school. Because of this, young, poor players were excluded from the business of basketball. Haywood's case went all the way to the U.S. Supreme Court and his victory forever changed professional basketball. But Haywood paid a price for making waves. His stand-out stints with the Sonics, Knicks and Lakers were overshadowed by the case and Haywood was ostracized for many years. FULL COURT seamlessly parallels Haywood's personal and professional struggles with the civil-rights struggles of the time. His untold, human-interest story will come to life through rare archival video, photography and music. Interviews with Haywood's peers and talented, young players - for whom he paved the way - will bring this compelling documentary full circle. The story culminates with Haywood's long overdue enshrinement into the Basketball Hall of Fame. FULL COURT features celebrity interviews with notable sports figures; Lenny Wilkens, Charles Barkley, Bill Bradley, Pat Riley, President of The Golden State Warriors Rick Welts, Dr. Harry Edwards and Michele Roberts.

A moderately involving look at a man who helped shape the course of the NBA and those who aspire to play in the league on their own terms.

There are no featured reviews for Full Court: The Spencer Haywood Story at this time.