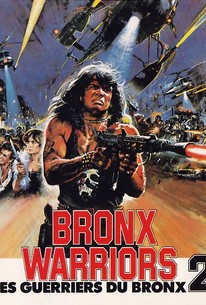 In this routine sci-fi sequel, Trash (Mark Gregory) is back in action again after his introduction in 1990: The Bronx Warriors, to defend that much-maligned New York burrough from total extinction at the hands of a vicious corporate giant. The General Construction Corporation plans on building luxury high-rises in the Bronx, but since the current Bronxonians are in the way, they have to be exterminated, obviously. Meanwhile, the media are to be spoon-fed the story that the good Bronx citizens have been relocated to New Mexico, apparently quite willingly. The only obstacle to the evil corporation's designs is a brave journalist, Moon (Valeria D'Obici) who is inspired to suggest that if the corporation's CEO could be kidnapped and held for ransom, they just might save the Bronx from all those luxury apartments. The man the fate offers to carry out this project is Strike (Timothy Brent), a king among thieves. The remainder of the story lurches from one gunfight to the next. ~ Eleanor Mannikka, Rovi

Castellari is a very accomplished action director. There are several hundred people killed in Escape from the Bronx, but it's never boring, as there's a lot of variety in the way people die and the camerawork is excellent for such low-budget film.

There are no featured audience reviews yet. Click the link below to see what others say about Fuga dal Bronx (Bronx Warriors 2) (Escape 2000)!