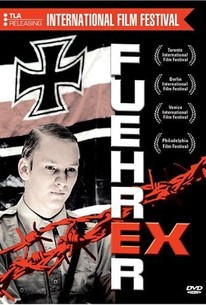 Two young East Germans are forced into joining the Neo-Nazi subculture with the Communist East German government largely to blame in director Winfried Bonengel's 2001 feature film debut Führer EX. Teen friends Heiko (Christian Bluemel) and Tommy (Aaron Hildebrand) lead rambunctious lives in pre-Perestroika East Berlin, with dreams of escaping the repressive government for the freedom of the West. Their world comes crashing down when Tommy is arrested and imprisoned for flag burning. Upon Tommy's release, Heiko learns his friend as gotten involved with Neo-Nazis. Now thoroughly disenchanted, the friends attempt a border crossing -- which only succeeds in getting them arrested and thrown into prison. Once again, Tommy teams up with the resident Neo-Nazi gang -- but Heiko initially resists until he suffers a particularly brutal prison rape. Tommy and the Neo-Nazis come to Heiko's aid via harsh vengeance, which succeeds in drawing the young man into the Neo-Nazis group as well as feeding his psychological descent into hate. Tommy begins to see the dangerousness in Heiko's newfound fanaticism, but may be helpless to bring his once peace-loving friend back to his senses. Führer Ex was a competing film at the 2002 Venice Film Festival. ~ Ryan Shriver, Rovi

There are no featured audience reviews yet. Click the link below to see what others say about Fuehrer Ex (Führer Ex)!