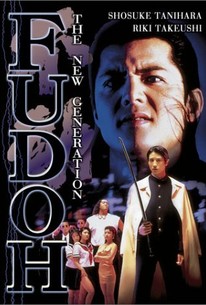 Seijun Suzuki meets the Grand Guignol in this wild hallucinatory yakuza drama, directed by Japan's gonzo cinema auteur Takashi Miike, about one of the ugliest family squabbles this side of Oedipus. The film opens with lifelong gangster Iwao Fudoh (Toru Minegishi) killing his grown son after an important mob deal goes south, as his younger son, Riki, looks on. Fast forward ten years, Riki Fudoh (Shosuke Tanihara) is the coolest kid in high school, who also runs a band of school-aged assassins. Flanked by two lethal bombshells in schoolgirl outfits -- Toko (Tamaki Kenmochi), who sports an Uzi, and Mika (played by porn star Miho Nomoto), who sports a blow gun and freakish muscle control in her nether regions -- along with a bevy of commando elementary school kids, Riki slowly seeks revenge on his father and his associates, just as Iwao's gang is planning to merge with an even more nefarious outfit hailing from Kyushu. Explosions, decapitations, and hermaphroditic coupling ensue. ~ Jonathan Crow, Rovi

If you're a connoisseur of this type of gory head-banging, you should be impressed.

Every so often a film comes along that just breaks your heart... and then there are films like this one that hit you in the head like an aluminum baseball bat.

Restraint is not a concept in the cinematic vocabulary of Miike Takashi.

A simple, even clichéd, gangster yarn that's peppered with enough deviant sex and graphic violence to nonetheless qualify as a singular experience.

Takashi Miike is a mixed bag of a director. There are some films that come across as brilliant and others that are just so-so. Fudoh: The New Generation is one that falls into the latter category.

There isn't much depth to the story, as it is basically assassination after assassination in a Yakuza themed film. Of course Miike tends to spice it up with the usual unique characters, bloody violence, nudity, sex, and strong language. This will come across as entertaining, however there are times when it is just unnecessary. It is almost like overbuilding certain aspects of the film.

The violence is a plenty and bloody. I mean, there are young kids and school girls performing kills in this picture. Seems like the typical gangster thugs aren't enough.

The acting is over the top and it matches with Miike's characters. Shosuke Tanihara is a little disappointing as Fudoh, but the beautiful schoolgirls in Tamaki Kenmochi and Miho Nomoto are there to take your eyes off of him. Riki Takeuchi is good, even though his character suffers from too little airtime, and Kenji Takano looks like he doesn't belong.

Fudoh: The New Generation will excite some and freak out others. Feel free to take a chance on this one.

The first Miike film I saw and boy was my ass kicked. This and Battle Royale are what got me in to Japanese films when I started getting tired of North American flicks. An incredible yakuza/exploitation classic.

Miike has done way better, aside from some fun scenes it doesn't go too far. Even something like City of Lost Souls is more solid. Also, the ending of this is just a damn slap in the face. Rikki Takeuchi should have been used more.