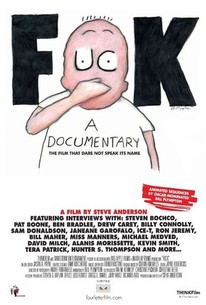 Critics Consensus: A documentary that sets out to explore a lingual taboo but can't escape its own naughty posturing.

Critics Consensus: A documentary that sets out to explore a lingual taboo but can't escape its own naughty posturing.

Critic Consensus: A documentary that sets out to explore a lingual taboo but can't escape its own naughty posturing.

The Queen Mother of all dirty words (as it was once described by Jean Shepherd) is examined through all its linguistic, sociological, legal, and ethical implications in this documentary. Filmmaker Steven Anderson interviews dozens of people about the history and function of "the F word," including language historians who have a hard time nailing down its origin, writers (including Hunter S. Thompson and Ben Bradlee) who talk about its role in literature and press freedom, comedians (among them Drew Carey, Janeane Garofalo, and Billy Connolly) who ponder its frequent presence in hipster humor, pop musicians (such as Ice-T, Pat Boone, and Alanis Morissette) who offer their theories about its role in contemporary culture, and social critics (including Michael Medved and Dennis Prager) who believe its currency is taking America into a dangerous place. F*ck also includes footage of famous figures caught using the word unexpectedly and animated sequences by Bill Plympton.

Despite its flaws, Fuck does manage to leave you energised and determined to fight to the death to defend freedom of speech - or at least sit back and fire off a few swear words of your own in celebration. Shit, piss, fuck, etc...

It's all reasonable but unoriginal stuff.

The insight-neutral scrag ends of what feels like ten decent documentaries on censorship, semantics, social policy and broadcasting coalesce in this painfully self-satisfied and poorly made 'shock-doc'.

A moderately amusing documentary about the second most offensive word in the English language.

Anderson's glib approach is to the movie's advantage, allowing anything profound to seem unexpected.

A film on our favorite word by Steve Anderson. The only fault I can find with this comprehensive and extremely entertaining symposium is that among the 35 people interviewed, no openly queer representative...

As well as being humdrum, this is past its sell-by date: the film is a product of the Bush years, with the liberals making all the old complaints about Dubya's encouragement of cultural puritanism.

This could have been far more illuminating, challenging, or at the very least entertaining.

Funny and controversial documentary, that investigate taboos in society about the word FUCK. Just like The Aristocrats, F*uck, is a entertaining film. Problem: the absence of answers and research. In this way, the documentary don't looks what really is the point, what the reason of the motion picture? Even Steve Anderson know. At least it's a fun trip.