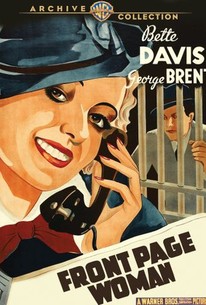 Ellen Garfield (Bette Davis) is a neophyte reporter with ambitions big enough to take on assignments usually reserved for men, including the execution of a woman convicted of murder (which causes her to faint). Curt Devlin (George Brent) is a newshawk for a rival paper who likes Ellen a lot, but not her career plans. The two keep crossing paths and tripping each other up, mostly by accident, with Curt's photographer pal Toots O'Grady (Roscoe Karns) keeping score. Curt would like to romance Ellen, but wants her to give up on being a reporter; and she won't give up until she proves she's as good a reporter as any man, including Curt. And when a routine fire that they're both covering turns into a case of disappearance and murder involving a well-known Broadway producer, they end up going head-to-head on both the manhunt for the presumed killer and the trial that follows.

Mike Monk
as Man
View All

Lacks authenticity and is so far fetched it'll hand newsscribes around the country a constant run of ripples. But it's light and has some funny lines and situations.

If you will keep in mind that this portrayal of newspaper work is a wee bit on the whimsy side, then Front Page Woman can be recommended as a downright amusing photoplay.

Absurd at times, with the two papers at one point printing absolutely identical stories, but directed and acted with sparkle and speed.

As far-fetched a newspaper yarn as ever was concocted.

Shoots for entertainment rather than for any accuracy on being a newspaper reporter.

Routine programmer notable only for Bette's presence. She brittle and driven making what she can out of a thin character but with material like this it's easy to why she rebelled against Warners for better films.