From Justin To Kelly2003 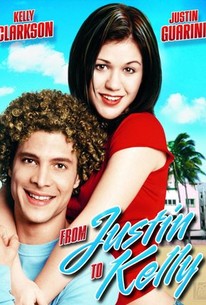 Critics Consensus: A notorious stinker, From Justin To Kelly features banal songs, a witless plot, and non-existent chemistry between its American Idol-sanctioned leads.

Critics Consensus: A notorious stinker, From Justin To Kelly features banal songs, a witless plot, and non-existent chemistry between its American Idol-sanctioned leads.

Critic Consensus: A notorious stinker, From Justin To Kelly features banal songs, a witless plot, and non-existent chemistry between its American Idol-sanctioned leads.

From Justin To Kelly Photos

From the producer and writer of Spice World and the director of She's All That comes this musical comedy inspired by and featuring the stars of Fox's hit reality show American Idol. Starring the winner and runner-up of the show's first season, Kelly Clarkson and Justin Guarini, as slightly fictionalized versions of themselves, From Justin to Kelly attempts to recreate the atmosphere of the fun-loving beach musicals of the 1960s. When Kelly (Clarkson) and Justin (Guarini) embark on a vacation in search of some fun in the sun with their respective groups of friends, the two meet and fall for each other at first sight. Unfortunately, a series of comedic mishaps and hijinks gets in the way of them getting together. Several song-and-dance numbers ensue. In addition to Clarkson and Guarini, the film stars Greg Siff, Brian Dietzen, and Katherine Bailess. ~ Matthew Tobey, Rovi

Michael Yo
as Vee Jay No. 2

Sam Surles
as Bathroom Girl No. 2

News & Interviews for From Justin To Kelly

View All From Justin To Kelly News

Critic Reviews for From Justin To Kelly

What's depressing about From Justin to Kelly, whose title seems to refer to the text messages he sends her, is that it's been made without a lick of love, skill, or, apparently, money.

Easily the worst beach movie ever made.

More than anything, From Justin To Kelly needs Simon Cowell.

How bad is From Justin to Kelly? Set in Miami during spring break, it's like Grease: The Next Generation acted out by the food-court staff at SeaWorld.

One of the worst movies you'll ever see -- but it's still not worth seeing.

Amid this glad tumble of Limited lycra ... surreality seeps in: American flags fly prominently; and despite sideline breakin', all rappers are white.

Fans may enjoy their Idol songs and parents may appreciate its wholesomeness, but there's little else to recommend in this throwback to the '60s Beach Blanket movies.

From Justin to Kelly is a musical so pedestrian it trips over its feet every time someone breaks into song or dance.

Television propelled teen idolatry -- the kind that Moses would probably have disapproved -- gets its ugly comeuppance...

This is such a manipulative product placing piece of dribble that it reeks of failure.

Is it too late to vote them off? For once, we don't have to tell you how bad a film is... you knew before they made it.

Audience Reviews for From Justin To Kelly

I just like it, okay? The ridiculously stereotypical yet clinically wholesome spring break scene. The matching trios of friends made up of people who would normally never hang out together. The inconsequential socioeconomic sideplot. The skirt made out of ties. Yes, the story is formulaic and the acting is either under or overdone, but the costume design and dance choreography are legit cool. Kelly Clarkson is in great shape for the sweet (if bland) girl-next-door, and Justin is all big-haired faux-swagger as the reformed partyboy. It's all hokey as hell, but I just roll with it.

You're better off just watch a music video of Kelly Clarkson or something.

Anyone who can make it through this movie, in its entirety, without fast forwarding or crying violently for long periods of time are in fact saints, and their miracles should be recognized by the church. This giant commercial for the series American Idol stars season one winner Kelly Clarkson and runner-up Justin Guarini as two star crossed lovers. The scene is set during spring break, on a beachfront somewhere Floridian, calling upon the Avalon and Funicello beach musicals of the sixties. Instead of the fun froth of those classics, we're given a series of songs and dance sequences that are reliant on the time period they are set: 2003. Let's remember that year in pop music and flinch at the fact we were all singing Clay Aiken's This is the Night, and move on. Besides the fact that the music isn't enjoyable (even in a guilty pleasure sort of way) and the acting is stale, the actual actors are annoying. Kelly's friends are air headed and uninvolved while Justin's are either pure sleaze without admonishment or cookie cutter dorky, the same sludge we've all seen a million times before. The only reason these two characters aren't together (though they spend a mili-second in each other's presence before falling in love, but I digress) is because of a plotting blonde friend, described as a "party girl" who isn't trying to change. There is no point to this, and because it's so lame brained and uninteresting, the surrounding sub-plots don't lend anything to the film except pith. The only redeeming value is Anika Noni Rose's singing voice, which would later be featured in the Oscar nominated Dreamgirls and The Princess and the Frog. Oh, and the title? I am clueless to its supposed charm. Not worth a curious glance, nor a runthrough.

Kind of a waste of money.

From Justin To Kelly Quotes