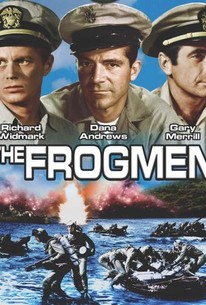 In this World War II drama, Richard Widmark plays Lt. Cmdr. John Lawrence, a strict navy commander assigned to replace the popular senior officer of a group of underwater demolition divers -- better known as frogmen. Lawrence tightens the discipline of this brave but fiercely independent group of underwater warriors, winning few friends in the process. The unpopular officer proves his worth in front of his men by neutralizing a live torpedo at the risk of his own life. The principal attraction of The Frogmen is its underwater photography, which would have been twice as effective in black-and-white. An intelligent, low-key wartime adventure, The Frogmen is weakened only by the excessive "Brooklynese" comedy of Harvey Lembeck. ~ Hal Erickson, Rovi

Rush Williams
as Soldier
View All

Critic Reviews for The Frogmen

The Frogmen is one of the most exciting war pictures in years.

Audience Reviews for The Frogmen

Unusual subject matter for a war film looking at the men who were in a way an early version of a navy seal. Starts strongly bogs down a little in the middle but generally keeps your interest. Richard Widmark is a most underrated actor being able to portray flawed but good men as well as being a superior villian when called for.