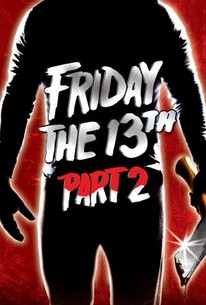 Critics Consensus: Friday the 13th Part 2 sets the template for the franchise to follow with more teen victims, more gruesome set pieces, and fewer reasons to keep following along.

Critics Consensus: Friday the 13th Part 2 sets the template for the franchise to follow with more teen victims, more gruesome set pieces, and fewer reasons to keep following along.

Critic Consensus: Friday the 13th Part 2 sets the template for the franchise to follow with more teen victims, more gruesome set pieces, and fewer reasons to keep following along.

Two months after the events of the original Friday the 13th, Alice (Adrienne King), the lone survivor or Mrs. Vorhees' killing spree, meets a grisly end in her city apartment. Five years later, a new group of co-eds converges near Camp Crystal Lake, scene of the original massacre and the drowning of Jason Vorhees that preceded it. This time around, the horny collegians attend a nearby training school for camp counselors. As half the group parties in town, an unseen assailant picks off the other half one by one. Only when camp leader Paul (John Furey) and his girlfriend, Ginny (Amy Steel), return to camp do they uncover the identity of their stalker -- none other than Jason (Warrington Gillette) himself, alive but grotesquely deformed as a result of his childhood drowning. Flashbacks chronicle Jason's behind-the-scenes activities in the first film (perhaps explaining how his mother was able to throw the dead bodies of muscular youths through windows with such apparent ease). The young couple's only hope to defeat the fiend lies in psych major Ginny's insights in Jason's mental state. ~ Brian J. Dillard, Rovi

Lauren Taylor
as Vickie
View All

The plot is an excuse for joining together horrors, all of the sado-masochist kind, and the acting is rudimentary at best. It probably will make a fortune.

Director Steve Miner and writer Ron Kurz introduce more potential victims than they have time or invention to knock off.

Producer-director Steve Miner doesn't move in and out of scenes with the flair of original producer-director Sean Cunningham nor is he able to create the same nauseatingly realistic murder situations.

This first sequel to Friday the 13th opens with mild panache... The script then jumps five years, assembles a new set of victims at the summer camp, and repeats the gory carnage as before.

This movie is a cross between the Mad Slasher and Dead teenager genres; about two dozen movies a year feature a mad killer going berserk, and they're all about as bad as this one.

One monster's company, II's a crowd.

Gory with a hint of humour, this pretty much does what it says on the tin.

There are no real surprises, just plenty of methodical murders, with graphic impaling being the favourite.

It still is a sad commentary that so much creative energy should have gone into such a sordid, kinky and ultimately demoralizing look at such bizarre facets of human nature both on the screen and in the audience.

Somehow, this one's even worse than the first.

Yes, it's a cheesy slasher film, but you know that going in, and this is a well-done example of the genre.

After a long recap of the first movie and impressive long takes in a tense opening scene, this equally brainless sequel just follows the formula of its predecessor - only with more fun gore -, helping define the now well-known clichés of the genre including an indestructible villain.

There were some jumping moments in it (well the music was effective I must say). But I don't recommend anyone to watch this. You'll find yourself muttering crap, crap, crap, crap... all the way to the end.

This was the first, in what turned out to be several, Friday the 13th sequels. The original idea was to attach the Friday the 13th moniker to a Horror movie every year, without the movies having any continuity to the original film. The "Halloween" franchise actually practiced this idea, when they released, "Halloween III: Season of the Witch". The 1983 release entirely distanced itself from the main antagonist of the series, Michael Myers. It also went on to bore audiences to tears, on it's way to bombing at the box office. Five years later Michael Myers returned. Wisely, Paramount prevented the folly of straying from an established brand, and insisted that Jason Voorhees take over as the villain in the series, and millions of dollars later, the rest is history. Stylistically, the film is nearly identical to the original. The direction of the film borrows heavily from the Italian slasher films that came before it. In this case, borrowed heavily is a gross understatement. Steve Miner, the film's director, went on to lift scenes directly from Mario Bava's, "Twitch of the Death Nerve". The most notable example is when Jason drives a spear through a pair of lovers. The scene is a shot-for-shot ripoff of the one that originated in the Bava film a decade earlier. Plagiarism aside, there are plenty of other things in the movie that annoy me. The body count rises so it doesn't seem quite as slow as it's predecessor. Still, it's downright brutal watching the counselors, literally killing time, in between meaningful scenes. In "Friday the 13th: Part 2", we get to see counselors playing chess, arm wrestling, and screwing around with vintage handheld video games. All the while, engaging in tediously forced dialogue. The plot holes that became a staple of the franchise are also very evident here. What's always bothered me, is how Jason ended up discovering the "Alice" character from the previous movie. I don't understand, did he just look her up in the phone book, or what? Well, he must have, because she received a creepy phone call, just minutes before her life was ended with an ice-pick. But that would have meant that Jason called her from within her own house, right? Or, maybe she had another deranged stalker. You'd think she would have explored some witness protection options. I don't know why I'm trying to apply logic here. Speaking of Jason, he was far from perfected at this point. Watching the character run is awkward. While watching him struggle to overtake the "Paul" character in a wrestling match is shameful. Aside from that, when Jason's on camera, he is no more intimidating than any other inebriated imbecile with a pair of overalls and a bag over his head. In case you haven't already figured it out, I'm not a very big fan of this chapter. I suppose it's taken on some sort of cult following, but that doesn't mean it's good. If you're set on watching all of the "Friday's", I suppose this is a necessity. If you just want to see a good slasher film, might I suggest, "Twitch of the Death Nerve". The makers of this film sure must've enjoyed it.

It's practically the exact same movie as the first one (including the obvious fake ending once again). It just feels repetitive after a while and the fact that they felt that doing 10 minutes of flashbacks and recap at the beginning was needed is just sad. It's like they think that they created a masterpiece or something... also, the movie just isn't scary whatsoever. It's not really a drop in quality from the first like Halloween and other franchises since it feels the same, but the quality in the first place wasn't that high to begin with. Talk about faint praise. Hopefully Jason finally gets his mask in the next one...