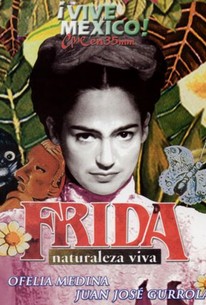 Frida Kahlo was more than a mere Mexican artist. Crippled, Kahlo used her art to speak for other physically afflicted souls. She also was a controversial political figure, commiserating with the likes of Leon Trotsky and Diego Rivera. Directed by Paul Leduc and photographed by cinematographer Angel Goded, Frida features the artist portrayed by Ofelia Medina. In 2002, Kahlo's story would again be told in another film called Frida, with Salma Hayek in the lead role.

... an affectionate and affecting tribute to a colorful woman.

The pain of Kahlo's existence is overwhelming, but it's a luxurious pain, ripe with longing.

There are no featured reviews for Frida at this time.