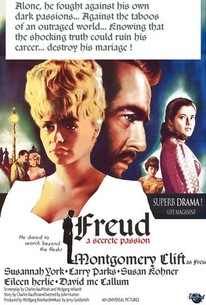 Filmed in Germany by American director John Huston, Freud is a sincerely felt but overly simplistic biopic of the pioneering psychotherapist. The brooding, introspective Montgomery Clift was a curious choice for the role of Sigmund Freud; at times he looks more off the beam than some of his patients (his comic-opera Viennese accent doesn't add to the credibility). The screenplay takes the shape of a detective mystery, attempting to link various crises in Freud's private and professional life with his theoretical conclusions, most often doing so within well-staged dream sequences. Less successful are the scenes with the poor unfortunates who come to Freud for help, notably an embarrassing sequence with a young man suffering from an Oedipus complex. Freud was at one point supposed to have been scripted by existentialist playwright Jean-Paul Sartre, who gave up after he realized that the subject would require a four- or five-hour film at the very least.

While in different hands (Orson Welles's, for instance) these radical themes could have inspired more hallucinatory, probing, and inward images, Huston nonetheless evokes an apt sense of wonder, admiration, and awe.

Huston seems inhibited rather than inspired by [the material]: his energy bottled up and his camera forced to a standstill by careful compositions.

I cannot imagine why director John Huston decided that the painful mumble and glassy stare of Hollywood's Montgomery Clift made him suitable to portray the Viennese father of psychiatry.

The process of building the biopic that sums up five fundamental years in the life of the father of psychoanalysis in just two hours of footage was an arduous and extremely complex work. [Full Review in Spanish]

Montgomery Clift is all wrong as Freud... in general he seems defensive and helpless, just the opposite of the hard customer the young Freud must have been

A sincere and competent biopic on the early years of Dr. Sigmund Freud.

The idea of making a film about Sigmund Freud (1856-1939), the legendary founder of psychoanalysis, is not immediately attractive. The film is a great drama, but closet drama, in which most of the action takes place within the mind. The question is how to translate this action into a viable script that would produce a film from which audiences would not flee? Film makers discovered three ways to make the tragicomedy of Freud's heroic years filmworthy. First, they depict Freud thinking to himself as he stalks around Vienna at night, in top hat and overcoat. This technique of dramatizing historic though processes led them to have Montgomery Clift, who portrays Freud, do a great deal of staring. What Freud does relatively well is depict a brilliant man's search--even though his discoveries, like Charcot's treatments of hysterics, come a bit too easily and too casually. However, for anyone eager to establish a useful timetable of early psychoanalysis, a good biography remains indispensable...