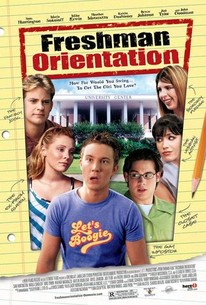 Critics Consensus: This over-the-top comedy suffers from an exhaustive screenplay, which tries too hard to be funny...and fails.

Critics Consensus: This over-the-top comedy suffers from an exhaustive screenplay, which tries too hard to be funny...and fails.

Critic Consensus: This over-the-top comedy suffers from an exhaustive screenplay, which tries too hard to be funny...and fails.

Can a young man win the hand of the girl of his dreams by convincing her that he prefers the company of men? That's the dilemma facing the protagonist of this independent comedy. Clay (Sam Huntington) was a big man on his high-school campus, but he discovers he's just another nobody when he starts his first year of college, and while he expected to be making time with lots of pretty coeds, most of the girls on campus could care less about him. As Clay hopes to improve his social status by rushing a fraternity after his dorm roommate unexpectedly dies, Amanda (Kaitlin Doubleday), another incoming freshman, is similarly hoping to join a sorority, and as part of her initiation she and the other pledges are each instructed to pick up a certain type of "loser" guy for a party where the boys will be humiliated as part of the evening's entertainment. Amanda is supposed to find a guy who is obviously gay, and her friend Jessica (Heather Matarazzo) mistakenly thinks Clay fits the bill. It doesn't take long for Clay to realize what's going on, but he decides to play along if it means going out with a pretty girl, and he gives himself a crash course in gay behavior in hopes of winning Amanda's heart with some help from amiable queer bartender Rodney (John Goodman). Produced under the title Home of Phobia, Freshman Orientation was the first feature film from writer and director Ryan Shiraki.

John Goodman has a nice turn as a queen with a heart of gold.

...goes way over the top for the Greeks vs. Gays climax.

A campus comedy with a dirty mouth, an innocent heart and a surprisingly wise mind, Freshman Orientation uses identity politics as a road to romance and emotional maturity. The naked breasts are a bonus.

This trivial film toys with the postmodern lifestyles.

Freshman Orientation is not incompetently made. Nor is it badly acted. But there's not a fresh idea in it, and everyone on screen seems to be in a different comedy.

...too often feels more like a tapped-out keg than a provocative romp.

Admirably aiming to recreate the feelings of newfound freedom and self-discovery that college inspires, Freshman Orientation never finds a way to successfully execute its good intentions.

...might push boundaries better were it not so painfully unfunny.

The charms of this college gross-out comedy with a "message" are elusive.

Consider my two-star rating an indication that the film's Gut-Buster-to-Forehead-Slapper ratio is relatively even.

OK, it's official: I no longer care about 18 year olds.

This could be the next American Pie movie (and that hasn't been a compliment since the third one!).