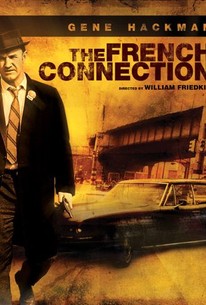 This gritty, fast-paced, and innovative police drama earned five Academy Awards, including Best Picture, Best Adapted Screenplay (written by Ernest Tidyman), and Best Actor (Gene Hackman). Jimmy "Popeye" Doyle (Hackman) and his partner, Buddy Russo (Roy Scheider), are New York City police detectives on narcotics detail, trying to track down the source of heroin from Europe into the United States. Suave Alain Charnier (Fernando Rey) is the French drug kingpin who provides a large percentage of New York City's dope, and Pierre Nicoli (Marcel Bozzuffi) is a hired killer and Charnier's right-hand man. Acting on a hunch, Popeye and Buddy start tailing Sal Boca (Tony Lo Bianco) and his wife, Angie (Arlene Faber), who live pretty high for a couple whose corner store brings in about 7,000 dollars a year. It turns out Popeye's suspicions are right -- Sal and Angie are the New York agents for Charnier, who will be smuggling 32 million dollars' worth of heroin into the city in a car shipped over from France. The French Connection broke plenty of new ground for screen thrillers; Popeye Doyle was a highly unusual "hero," an often violent, racist, and mean-spirited cop whose dedication to his job fell just short of dangerous obsession. The film's high point, a high-speed car chase with Popeye tailing an elevated train, was one of the most viscerally exciting screen moments of its day and set the stage for dozens of action sequences to follow. And the film's grimy realism (and downbeat ending) was a big change from the buff-and-shine gloss and good-guys-always-win heroics of most police dramas that preceded it. The French Connection was inspired by a true story, and Eddie Egan and Sonny Grosso, Popeye and Buddy's real life counterparts, both have small roles in the film. A sequel followed four years later. ~ Mark Deming, Rovi

News & Interviews for The French Connection

View All The French Connection News

Critic Reviews for The French Connection

Its trigger-fast, explosive scenes and high-tension chase sequences (the one in "Bullitt" pales by comparison) will have you literally gasping for breath.

To watch The French Connection now is to experience the shock of the old: a lost world of the city, and a lost style of film-making.

There is only one problem with the excitement generated by this film. After it is over, you will walk out of the theater and, as I did, curse the tedium of your own life. I kept looking for someone who I could throw up against a wall.

It's hard to imagine it now, but there are only two types of cop movie: pre and post-The French Connection. That's how big it is.

A knockout police thriller with so much jarring excitement that it almost calls for comic-book expletives. POW! ZOWIE!

Producer Philip D'Antoni and screenwriter Ernest Tidyman have added enough fictional flesh to provide director William Friedkin and his overall topnotch cast with plenty of material, and they make the most of it.

A superb cop thriller based on historical events and starring Gene Hackman in one of his best performances.

As far as action goes, it equals the best of the genre. The pace is so incredible, thanks to director William Friedkin [that] it seems like the picture takes only fifteen minutes to run off... and it's two hours long!

...while The French Connection shows us the realistic problems of life on the street and the drug trade, it also totally entertains us.

One of the films that laid out a roadmap for how '70s cinema might go, and it is to the medium's benefit that it followed that map.

Audience Reviews for The French Connection

William Friedkin keeps the action moving as a couple of over dedicated cops chase down a big drug shipments coming into New York. It's a game of cat-and-mouse as the cops watch the crooks watching the cops, each side looking for a break. The bad guys seem like country squires enjoying the fat of life, while the good guys are like barely caged wild animals, a wonder they don't bite anyone around them. Is the good side good, or what, the take away question. Rarely has New York felt as slimy, as rat infested. Watching all the old style autos, land based cruise ships, tool around is cool too. The difference between how cops treat black people versus how they interact with whites is spot on. Good show.

An intelligent and at times gripping thriller that features admirably-shot action sequences and well-executed cinematography.

Exciting. Surprising. And (not surprising!) and excellent performance by Gene Hackman.