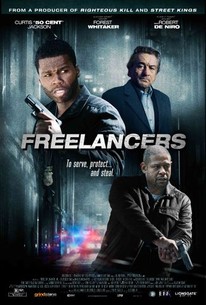 The son of a slain NYPD officer joins the force, where he falls in with his father's former partner and a team of rogue "Gotham cops." His new boss, Sarcone (De Niro), will see if he has what it takes to be rogue through many trials and tribulations of loyalty, trust and respect. However, when the truth about his father's death is revealed, revenge takes over and he won't stop until justice has been truly served. -- (C) Official Site

"Freelancers" is De Niro's second-worst film of 2012 after "Red Lights." God help us; he's got two more to go.

Truth is, [Curtis] Jackson is not a good actor; not in the slightest.

This is a film with no heroes, no narrative rhythm, and characters with no morals. As a result, it is also a film with no sense of purpose, no authenticity and no life.

Didn't get much of a release, was pretty much snuck out straight to DVD. The cast is quite epic if you read the cover, De Niro, Whitaker errr...50 Cent and um Vinnie Jones, well come on its got De Niro and Whitaker sheesh!. A crooked cop thriller, wait, a run of the mill unoriginal crooked cop thriller to be more precise. 50 (man that's easy to type) joins the NYPD with his two best buds. De Niro is his new boss in a special task force division, the same division that 50's father was once a member of before he was murdered. So far so good for 50 nickels errr Cent, only one problem...this division is crooked! not really a surprise seeing as I told you already. Huh maybe I should reword that, to hell with it!. In all honesty this film is actually a good watch, well the first half or so. As we watch 50 and his two mates join the force and get with their respective partners things get real interesting. We learn early on all is not kosher in this city with the thin blue line. 50 is under the wing of Whitaker who is your stereotypical drug using corrupt cop, he ignores crimes, sells narcotics and kills people without thinking. Naturally 50 slowly gets corrupted himself by this lifestyle. 50's other two friends (one black, one white) find themselves with racist partners. But to make things even we get racism from both sides of the coin, the white rookie gets a neo Nazi looking redneck and the black rookie gets a black fat middle aged partner who dislikes whites. This early part of the film is terrific as it shows some excellent dialog between these new cop partnerships, racial tension and violence. Everything is pretty cliched and old but its still grabs your attention or should I say morbid curiosity. The scary thing is each racist cop duo do have seemingly accurate points to make about each others people, its not very PC but the truth hurts and in America I'm sure it happens for real. What the older black cop says about his own people (mainly the younger generation) I'm sure hit home with many, clearly in the script for a reason. As fast as we get this exciting stuff it fades away and we are left with just a dull informer cop thriller. 50 simply sees the error of his ways and decides to go undercover to stitch up the crooked cop ringleaders. Its weird because you are half expecting a really good racial bust up flick within the police force, but that just slips away. The big guns in the film elevate this greatly, without them it would sink, of course they are very good, you know who I mean. Unfortunately they also show 50 for the very very average actor he is, you could say he's learning the ropes but no, you can see this guy ain't no actor. I guess this was a vehicle for 50 Cent because I can't really see any other reason for it to have been made, its a very dated concept which has been done many times before much better. Good start, had potential but totally loses its way from the midway point I'm afraid.

"Freelancers was a miss for me. I didn't like the movie and I was extremely disappointed to see Mr. De Niro associate himself with such a bad film. The main character, that being the rapper 50 cent, was dull and unimpressive. I didn't care what happened. I just wanted it over with. The movie is another dirty cop film that brings nothing new to the table and is forgetful. I won't be seeing this again."

To serve, protect and steal. Not a great movie! The Plot is really weak from start to finish, the story has lots of holes and it feels really made up on the spot. I will be honest and the only reason I watched this film was because Robert De Niro starred in it. Usually his films are great along with great acting but his appearance in this did not help the movie any. The film tries so hard to be Training Day, but it just reminds us how unique that movie really was. Watch at own risk! The son of a slain NYPD officer joins the force, where he falls in with his father's former partner and a team of rogue cops. His new boss, Sarcone, will see if he has what it takes to be rogue through many trials and tribulations of loyalty, trust and respect. When the truth about his father's death is revealed revenge takes him over and he won't stop until justice has been truly served.