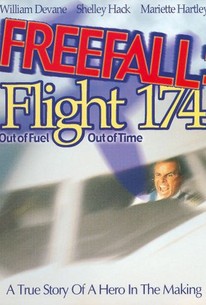 The made-for-TV Falling From the Sky: Flight 174 was based on a true story that occurred high over Canada in July of 1983. While en route from Montreal to Edmonton, a brand-new Boeing 767 runs out of fuel in mid-flight. With only a cursory knowledge of the jet's inner works, the crew is forced to desperately improvise a means of rescuing the passengers by gliding the aircraft to a runway in Winnipeg--35 miles away. Although the actual story has enough inherent drama for five TV movies, the producers felt the necessity to add a few overly melodramatic touches to heighten the suspense; also, aviation enthusiasts weren't too happy with the script's inaccuracies, nor were movie purists impressed by the surprisingly shoddy computer enhanced special effects. Nonetheless, the film boasts excellent performances, especially from William Devine as Captain Bob Pearson. First broadcast by ABC on February 20, 1995, Falling From the Sky was adapted from William and Marilyn Hoffer's book Freefall, and has since been retitled Freefall: Flight 174 for cable-TV play.

There are no critic reviews yet for Freefall Flight 174. Keep checking Rotten Tomatoes for updates!

There are no featured reviews for Freefall Flight 174 at this time.