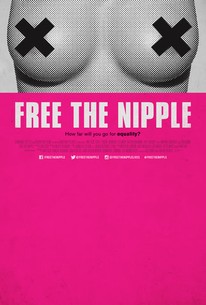 A group of fearless women fight for their right to go topless in public, as they smash societal taboos one bare breast at a time. Based on a true story, this spirited satire follows New York City activists Liv and With, who take their crusade for gender equality from the streets of the urban jungle to the courts. More than just a movie,Free the Nipple has launched an empowering real-life movement, inspiring women across the globe to take back their bodies. (C) IFC Films

Lina Esco
as With

Critic Reviews for Free the Nipple

Yes, breasts are a beautiful, natural, baby-nourishing thing, and they've been bizarrely shamed and oversexualized in American culture-but writer-director Lina Esco's amateurish debut is not the film to set them free.

"Free the Nipple" is a bright, scrappy satire inspired by a real-life movement to nationally legalize a woman's right to go topless in public - just like a man can.

"Free the Nipple" is first and foremost the cinematic equivalent of a billboard.

Its meandering storyline, poorly drawn characters and lifeless scenes are, at their best, merely predictable and bland. When things go wrong - and man, do they go wrong - it's just embarrassing.

The movie is so tone deaf, and travels so far from its original feminist ideals, that it's painful to watch.

It's too rare for movies to depict women working together as friends to effect political change, and this one makes it seem righteous, loud, and fun as a rock concert.

As an attempt to promote grassroots advocacy, this low-budget drama feels shallow and takes itself too seriously. But it works just fine as an excuse to see plenty of topless women.

Free the Nipple is more of a confusing and frustrating experience than an inspiring one...

With's rapid and multiple changes of heart fly fast and furious in the film's first act, making it difficult to get a handle on either her motivations or her basic character.

Free the Nipple is ... a silly little bit of fluff and, worse, a painfully amateurish piece of filmmaking.

This is kind of didactic topical movie that distributes its rhetoric evenly between characters with clear distinction as to who's playing devil's advocate to the other one's points.

Audience Reviews for Free the Nipple

Thinking that this film was a documentary I was very excited to see it. How could I not be with the social media flurry around the likes of Rumer Willis' campaign to go topless around New York City, Miley Cyrus' support of the film thanks to her association with Esco, and countless other pro-feminist celebrities' endorsements? To my total disappointment this is not a documentary, and instead a dramatization of the movement's inception. Yeah, I felt the exact same way you must feel right now. Read more at http://www.bluefairyblog.com/reviews/2015/7/21/free-the-nipple