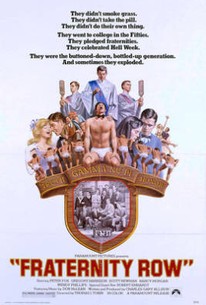 Written and produced by USC graduate student Charles Allison and featuring a cast and crew largely made up of students, this powerful, fact-based drama takes an unflinching look at the brutal sadism inherent in the hazing process of a 1950s-era fraternity as it tells the tragic tale of a young pledge whose desire to enter a particular frat house overrides his common sense. The film was funded by grants from various foundations and the cast and crew received expert advice from various Hollywood veterans. The tale is narrated by Cliff Robertson and scored by Don McLean. One of the co-stars was Scott Newman, the late son of Paul Newman who died of a drug overdose shortly after this film's completion.

Bernard R. Kantor
as The Professor

If the content interests you, the movie's faults, obvious as they are, may seem forgivably superficial in the long run.

There are no featured reviews for Fraternity Row at this time.