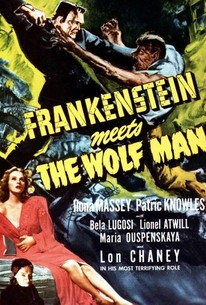 In this fifth film in Universal's "Frankenstein" series, Larry Talbot, alias The Wolf Man, is brought back to the land of the living. The anguished Talbot commiserates with gypsy lady Maria Ouspenskaya, who advises him that the only way he'll stay dead is to confer with Dr. Frankenstein.

Bela Lugosi
as The Monster

As a kid, I enjoyed this movie much more than I do as an adult. ALL those great Universal monsters in a single film. Even Dracula shows up. But, these days, FMWM seems contrived and dull.

Pretty much the end of Universal's horror line as a home for even the vaguest kind of serious filmmaking.

"The last great Universal Frankenstein movie, despite the overstuffed title."

It starts off really well, stalls a little toward the middle, goes bonkers for one really odd musical number, and then derails completely at the end.

Doesn't deliver all that much of what the title promises.

Pretty good sequels, not the best, but still worth seeing.

Enjoyable old Universal Studios sequel with Lon Chaney, Jr. reprising his role as Larry Talbot (aka The Wolf Man). Bela Lugosi is less than spectacular as Frankenstein's monster but that may have more to do with Boris Karloff's absence than Lugosi's presence.

Fairly mediocre. still, the atmosphere of universal pictures horror classics and two of its greatest monsters face-to-face is what saves it. good to see Lugosi playing the monster he once refused to incarnate.

A year after The Wolf Man became a huge success, Lon Chaney Jr played the part of Frankenstein in the latest sequel "Ghost of Frankenstein". He was excellent in the role, and from that you can clearly see where the inspiration came from to combine the two strands and have these characters meet each other. Incidentally, Chaney also played a vampire later that year in "Son of Dracula", even though he was completely unsuited to the part, but that makes him the only actor to play all three of Universal's main monsters. Oh, and he also played the Mummy in "The Mummy's Tomb". Anyway, I digress ... here we have Curt Siodmak, writer of The Wolf Man, returning again as screenwriter. All of the ingredients are there for a great sequel. It opens in Larry Talbot's tomb, with two graverobbers breaking in and disturbing his resting place. The moonlight comes through the window and falls on Larry's corpse, waking him from his slumber as the wolf man. He then gets taken to a hospital where he is deemed insane due to his insistence that he's a werewolf, but promptly escapes in search of the gypsy woman from the original film. She takes him to Frankenstein's town in search of his scientific expertise, and there he encounters Frankenstein's monster encased in ice ... my memory is a little hazy, but wasn't he consumed in fire at the end of the last movie? Ah, well. It should really have been called "The Wolf Man Meets Frankenstein", because Frankenstein here is only a fairly minor character in the story. Lon Chaney Jr delivers another great performance, at least as good as that in the first film if not better. Of course, he does only have to have one mood to convey here -- desperation. Bela Lugosi, much as I love him, is a terrible Frankenstein. He's the wrong size and shape, and he clearly has no respect for the role. Thank god he doesn't appear for that long. Although having said that, it does kind of make sense that he plays the monster, as the brain of his Igor character was placed in Frankenstein's head at the end of the previous movie. Not that they have much continuity other than that. The script certainly has it's moments, and the atmosphere of the two worlds of the Wolf Man and Frankenstein blend together fairly well, but on the whole this film just doesn't have enough interesting ideas and far too many dull moments. The set pieces are decent enough, but certainly not as striking as those in the earlier Frankenstein movies. Also, there's a fair bit of decidedly wooden acting from certain cast members, but that's to be expected from most of Universal's horror films. This sequel is entertaining enough, but it's not half as good as it could have been. It's worth watching if you liked the original.