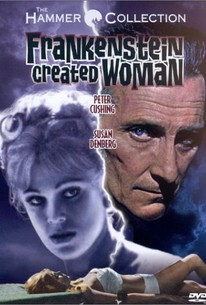 A solid entry in the Hammer Frankenstein franchise.

Even by the standards of the Hammer Gothic aesthetic, this movie has some very loopy notions upon which its plot hangs - yet it never comes anywhere remotely near camp or melodrama.

Good horror treatment as expected by the Hammer folks.

Not one of the better Hammer sequels, but still enjoyable for its wild concept.

the imperious baron imprisons the soul of a condemned man in the body of his suicidal lover, creating a vengeful swedish supermodel! it's no bride of frankenstein but it's very entertaining and seems almost quaint when u consider this came out only one year before rosemary's baby and night of the living dead. still my favorite hammer series and cushing rules as the mad doctor

My favorite of the series, Hammer's fourth Frankenstein entry is an offbeat, fascinating gothic masterpiece. The film ingeniously opens up with the guillotine execution of a drunken murderer (played with hardy relish by Hammer vet Duncan Lamont), unintentionally witnessed by his young boy, Hans. Years later, Hans (Robert Morris) is employed by the half-witted Dr. Hertz (Thorley Walters) who has taken in the ardent Baron Frankenstein ( Peter Cushing). Forgetting Freddie Francis' Evil Of Frankenstein, a so-so homage to Universal, Fisher picks up the series where he left off and firmly relates that the Baron is really the monster (the character is here introduced as being brought back to life through his own body-freezing experiment). At the local tavern, Hans gets into a fierce brawl with a trio of spoiled, arrogant aristocrats (Peter Blythe, Barry Warren, Derek Fowlds) after they insult the twisted and deformed Christina (Susan Denberg). Later that night after Hans consummates his love for Christina, the three delinquents break into the tavern and kill Christina's father, the landlord. Since he refuses to tell where he was during the murderous event, Hans is brought to trial, accused of murder and guillotined like his dad. Christina witnesses this and immediately commits suicide by drowning herself. In the meantime, the brilliant Baron has contrived a way to capture the human soul ("Bodies are easy to come by, souls are not," proclaims Frankenstein). He gets a hold of Hans' body, captures his soul, and transfers it into the wretchedly salvaged corpse of Christina. Luckily, the Baron is also a pioneer in cosmetic surgery, and under the faithful hands of Dr. Hertz (the Baron's hands are burned) is able to transform Christina into a beautiful blond bombshell. As she now harbors the vengeful soul of Hans, Christina is able to use her seductive charm to kill the ones responsible for her father's and Hans' deaths. Not for all tastes, I personally love this movie think it gets better with repeated viewings. It's totally unconventional as far as "Frankenstein" films go, and it takes a director like Fisher, an actor like Cushing and a screenwriter like Anthony Hinds to make it succeed on every level. Hind's script wastes no opportunity at overlapping a number of morbid sequences (two executions, a murder, a suicide, and the Baron's unworldly experiments) to lead up to the third act, which involves Christina's revenge on the three antagonists. Add other bizarre circumstances such as Christina carting around Hans' severed head as inspiration for vengeance, and later conversing to herself in his voice, and you have a satisfying horror tale to say the least. Fisher was always quoted as saying that Frankenstein Must Be Destroyed was his favorite film because of the "love story" aspect of it, but Frankenstein Created Woman is arguably his most romance-driven effort. The relationship between Hans and Christina is what brings the story to the predicament that it's in, and Christina's unexpected discovery of her lover's beheading, followed by her own suicide, is one of the director's most powerful scenes. Although he's given less to do here then in the other Frankenstein films, Cushing is awesome to watch in every motion and every shred of dialogue. He's kinder than usual this time, even displaying moments of concern for the young leads when their lives are at stake, but Cushing plays him cold, chauvinistic and determined, giving the impression that any warmth he expresses is only to boost his personal goals (such as in the closing moments of the film). His refusal to accommodate the newly revived, confused Christina's request for a mirror is a brilliantly subdued example of his true character. Although Polish-born Susan Denberg only had several other acting assignments (including the "I Mudd" episode of Star Trek and the Stuart Whitman vehicle, An American Dream) and got the job because of her spread in Playboy (often the only requirement to star in a Hammer Horror), she excels in the role. Even though another actress dubbed her voice, she convincingly changes from innocent, suicidal ugly duckling to confused, suicidal and possessed beauty. But the performances are great all around; from Robert Morris' gentle yet easily enraged Hans to Thorley Walter's intoxicated, bumbling Dr. Hertz, whose fatherly kinship with Christina presents some of the film's most touching moments. A great film and worth checking out for first time viewers and well worth another look for those who have seen it

If one of the great ironies of Hammer is that their best 'Dracula' movie doesn't even feature Dracula (Brides of Dracula), yet another is that their best 'Frankenstein' movie is the one with the female monster! Colourful, atmospheric, well acted and boasting an ingenious revenge plot involving the transference of souls (which I'm trying hard not to spoil here), what makes Frankenstein Created Woman particularly memorable is the surprisingly poignant love story between Frankenstein's servant, Hans (Robert Morris), and the deformed daughter of the local innkeeper, Christina (Susan Denberg). Denberg's excellent performance in this movie is a notable exception to the rule that Hammer were generally at their dullest when attempting to showcase some European starlet or other, though a good portion of the credit must go to whoever dubbed her voice. Unnecessary or bad dubbing in movies is one of my pet peeves, but this is perhaps the only example I can think of where the dubbing process unquestionably enhances a performance, lending a disembodied, otherworldly strangeness to Denberg entirely appropriate to her character, both before and after Frankenstein gets his hands on her.

Without a doubt the weakest and most boring of Hammer's Frankenstein franchise.