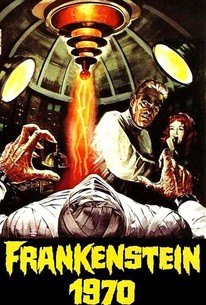 This is one of the more off-beat entries into the Frankenstein sub-genre, in that it features the original Creature, Boris Karloff (who really hams it up) playing the disfigured grandson of the famed mad baron in a style that combines gothic horror with the awe and fear created by the newly dawned atomic age. The story begins in the title year and finds Victor the III living in the ancestral castle and strapped for the cash he needs to resurrect his grandfather's experiments. He needs a fortune because this time he wants to use atomic power to bring the monster to life. To scare up the needed cash, he lets a television crew come to his famous digs to shoot a show. He ends up getting a lot more than money from the cast and crew and eventually he succeeds in creating a brand-new Creature. Unfortunately, the monster proves to be as volatile as his predecessors, and tragedy for both master and creature ensues.

Mike Lane
as Hans
View All

The creature looks more like a mummy with a head as square as Spongebob's, while Karloff is forced to spend too much time just shambling around his supposedly futuristic (note the title) laboratory.

A decent opening and Charlotte Austin's foxiness aside, Frankenstein 1970 is possibly the dullest movie I've seen in my life. And I watched the third Twilight movie the night before, I'd like to add. I don't get the 1970 thing considering the movie came out in 1958 and didn't look futuristic at all. Boris Karloff's school cafeteria counter garbage can included. Even fans of schlock (of which I am one) are going to have a hell of a time getting through this one....