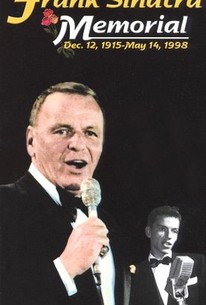 Family, friends, and associates recall "The Chairman of the Board" in this compilation video that salutes the world renowned, sometimes controversial singer and celebrity Francis Albert Sinatra (1915-1998). Born in Hoboken, NJ, Sinatra became one of the world's most admired all-around entertainers. Besides making and breaking records (literally and figuratively), "Old Blue Eyes" made his mark as a radio star, an Academy Award-winning actor, and a quintessential Las Vegas act. His work in television was less celebrated, but he put in his time there as well, starring in musical variety shows for CBS and ABC, as well as numerous TV specials. Highlights of this video include archival performance footage and a clip of Sinatra being interviewed by the influential Edward R. Murrow.

There are no critic reviews yet for Frank Sinatra Memorial. Keep checking Rotten Tomatoes for updates!

There are no featured reviews for Frank Sinatra Memorial at this time.