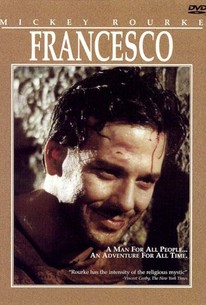 Told in flashback, the film relates Francis of Assisi's evolution from rich man's son to religious humanitarian and eventually to full-fledged saint. Francesco was based on Hermann Hesse's Francis of Assisi, which director Liliana Cavani had previously filmed in 1966. The Saint and founder of the Franciscan Order of Friars Minor is played by Mickey Rourke, and his inspiration, the woman who later became Saint Clare, is played by Helena Bonham Carter. Raised as the pampered son of a merchant, Francis goes off to war only to return with a profound horror for the society which generated such suffering. In one scene, as an act of renunciation, he strips himself of his fine clothing in front of his father and leaves the house naked and barefoot, joining the lepers and beggars in the poor section of town. The film follows with a series of episodes from the saint's life rather than a coherent narrative, following up until his final days when he receives the stigmata, or wounds similar to those on the body of Jesus at the crucifixion.

Mickey Rourke
as Francis of Assisi

Peter Berling
as Guido--Bishop of Assisi

Sofia Amendolea
as Woman in the Hovels

Nicoletta Boris
as Woman in the Hovels

Enrica Brunelli
as Woman in the Hovels

Francesco Fenati
as Woman in the Hovels

Monica Fiorentini
as Woman in the Hovels

Loris Loddi
as Woman in the Hovels

Egidio Termine
as Man in the Hovels

Memo Dini
as Man in the Hovels

Giovanni Tamberi
as Man in Lateran Palace
View All

How has this vibrant human firebrand, this unpredictable, leaping, shouting zealot, been transformed into the sheepish, subdued, self-deprecating cypher played by Rourke?

There are no featured reviews for Francesco at this time.