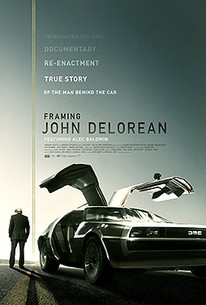 Framing John DeLorean recounts the extraordinary life and legend of the controversial automaker, tracing his meteoric rise through the ranks of General Motors, his obsessive quest to build a sports car that would conquer the world, and his shocking fall from grace on charges of cocaine trafficking. Interweaving a treasure trove of archival footage with dramatic vignettes starring Alec Baldwin, Framing John DeLorean is a gripping look at a man who gambled everything in his pursuit of the American Dream."

Dark Phoenix Lands with a Thud

...why not make a borderline bat-bleep crazy docu-something of a film chronicling the whole thing?

It's both inspiring and a cautionary tale, filled with drama, intrigue, hubris, comedy and tragedy. It's an American story, and a wild one at that.

Dramatic reenactments in documentaries are rarely that effective. And the ambitious, starry level to which they're taken in the otherwise involving biodoc "Framing John DeLorean" only underscores how distracting and unconvincing they can be.

Like DeLorean, this documentary admirably is not afraid to take risks.

An uneven blend of fact and fiction.

It is true that no movie can tell the full story of a man's life. But movies like this one can tell us something important about our own.

Every minute that went by I kept on thinking "What is the point of this movie?". This should never happen with documentaries. [Full review in Spanish].

Combining documentary footage and interviews with Baldwin's convincing reenactments (and truly, who better to play another '80s raider than Baldwin?), the true story is allowed to shine through, the fact stranger than fiction.

Joyce and Argott cleverly depict the story of an extraordinary con man; and like the aforementioned biopics, his story is a compelling one.

a fascinating roller-coaster ride through the life of one of America's most famous post-war innovators.

You don't have to be a gearhead to appreciate this hybrid documentary chronicling the rise and fall of the auto industry mogul with a narrative engine to match its subject's iconic sports car and charismatic swagger.

There are no featured reviews for Framing John DeLorean at this time.