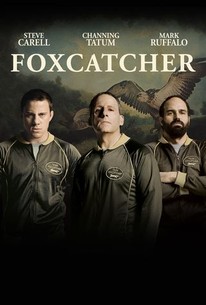 Critics Consensus: A chilling true crime drama, Foxcatcher offers Steve Carell, Mark Ruffalo, and Channing Tatum a chance to shine -- and all three of them rise to the challenge.

Critics Consensus: A chilling true crime drama, Foxcatcher offers Steve Carell, Mark Ruffalo, and Channing Tatum a chance to shine -- and all three of them rise to the challenge.

Critic Consensus: A chilling true crime drama, Foxcatcher offers Steve Carell, Mark Ruffalo, and Channing Tatum a chance to shine -- and all three of them rise to the challenge.

FOXCATCHER is a psychological drama directed by Academy Award nominee Bennett Miller (MONEYBALL) and starring Golden Globe winner Steve Carell, Channing Tatum, Academy Award nominee Mark Ruffalo, Academy Award winner Vanessa Redgrave and Sienna Miller. The film was written by E. Max Frye and Academy Award nominee Dan Futterman. FOXCATCHER tells the story of Olympic Gold Medal-winning wrestler Mark Schultz (Tatum), who sees a way out from the shadow of his more celebrated wrestling brother Dave (Ruffalo) and a life of poverty when he is summoned by eccentric multi-millionaire John du Pont (Carell) to move onto his estate and train for the 1988 Seoul Olympics. Desperate to gain the respect of his disapproving mother, du Pont begins "coaching" a world-class athletic team and, in the process, lures Mark into dangerous habits, breaks his confidence and drives him into a self-destructive spiral. Based on actual events, FOXCATCHER is a gripping and profoundly American story of fragile men who pinned their hopes for love and redemption on a desperate obsession for greatness that was to end in tragedy. (c) Sony Classics

Gabrielle B. Burton
as School Secretary

[Miller] is equally adept at portraying the peculiarities of wrestling here, and how those physical moves -- beautifully choreographed and executed -- sync with deeper psychological currents.

It is, in many ways, beautifully made, giving its scenes the time to unfold, holding its shots patiently, showing, not telling. And the performances live up to this approach.

Foxcatcher is brilliantly acted and extremely well crafted in a wintry, slow burning way but has an emptiness at its core.

A movie that appears to be about wrestling but in fact is a disturbing, testosterone-rich tour of the inadequacies of an American billionaire and his athletic protégé.

A true crime drama with a twist.

There's just no life in the film: aiming for a tone of studied foreboding, Bennett Miller instead sucks all the energy from his story.

Miller's motto seems to be, "You like that shot? I got four more just like it!" The final product seems flat and often downright boring.

An almost unrecognizable Carrell makes a meal of Dupont's chilly eccentricity, but it's Ruffalo and Tatum who give the most surprising performances.

Foxcatcher is an impressive film that depicts the double edged sword of male camaraderie, a blade that offers safety and comfort while unintentionally fomenting jealousy and contempt.

Foxcatcher is a fascinating study of dedication, loneliness and power. In many ways it's a tonally opposite companion to Whiplash. Sadly, it's also nowhere near as good.

With Bennett Miller's Foxcatcher, we have a film which, despite devoting significant screentime to the sport of large men in tights, has as its main theme the absolutely corrosive effect of too much money on just about everything.

Carell is good in a brooding, atmospheric movie but Channing Tatum and Mark Ruffalo turn in career-best performances.

A story that's tragic at the outset, told by professionals at their craft literally reaching for new heights, makes for exhilarating filmmaking of the highest quality beyond a shadow of a doubt. As some might note, the pace seems slow, but in retrospect the simmer brings forth fully formed human drama. Carell, Tatum and Ruffalo very nearly seem to race to give the best performance and you as judge will be as perplexed as I as to who in fact might have won.

Oddly neutral and lifeless retelling of the events surrounding the Foxcatcher wrestling team of the 80s. The acting is top notch and takes the film through some slow parts, but its almost documentary style keeps the viewer at a distance to the characters and the events. Even the shocking and tragic ending keeps you somewhat unimpressed, but at least it gets you curious about the real persons and events behind this. The acting performances stand out.

There are some movies out there that could be considered slower-paced than most, and then there are those films where they move at such a snail's pace that the likes of caffeinated drinks and a purposeful mentality is needed before embarking on such a cinematic adventure. "Foxcatcher" is the latter. "Foxcatcher" is a peculiar beast; not only is the legendary comedy star Steve Carrell playing quite possibly his first dark figure, but the film itself is a chilling tale that creeps at a lumbering pace. It isn't quite so slow however that progression occurs within an hour into the movie -- it just so happens that Bennett Miller reveals story progression crumb by crumb. By the time the film begins finalizing the final act, the narrative takes only 3 significant turns, revealing that the plot, in its entirety, is very slim in density. So why a whopping 2 hour and 10 minute running time for such a gaunt plot? Miller crafts the film to have the tone -- cold, haunting, and dreariness -- as its focal point. By the final minutes of the film, Miller successfully engulfs the audiences in a sludge of dread, betrayal, and confusion that's hard to shake off way after the film has come to a close. "Foxcatcher" may not be the most fast-paced movie nor is it the most immersive, but just like "Requiem for a Dream", its subtle tone slithers around -- up the leg, to the neck. It's not quite the greatest movie that has ever hit cinema theaters, but its different approach to convey a dark, dreary, and cold world differ it from many other films.

If a film can have a specific aura, or tone, this film's is "creepy". It is settled into its framework, like it a chill can settle into your bones, and the feeling of uneasiness follows you throughout the story of world class wrestler Mark Schultz's relationship with the world's richest man, John du Pont. This is a film for actors, and the cast does not disappoint, as their characters fill the screen from top to bottom. While this is not a bigger than life production, it tells a story that is indescribably unique, and couldn't have been handled in better hands. Read more at http://www.bluefairyblog.com/blog/2015/3/26/foxcatcher