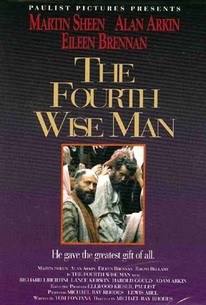 Made for television, The Fourth Wise Man was syndicated to local TV stations during Easter week of 1985. Martin Sheen, a devout Catholic who is no stranger to religious television, heads the all-star cast. Sheen plays Artaban, a wealthy Persian doctor of Biblical times, who embarks upon a search for the newborn Messiah. Artaban intends to take his journey with the three more famous Wise Men, but somehow never manages to link up with them, and ends up spending 33 years on his quest. Of interest is the presence of two father-son acting combinations in the cast; Martin and Charlie Sheen, and Alan and Adam Arkin. Though never seen, Jesus Christ is heard, with James Farentino supplying His voice. The Fourth Wise Man is based on the 19th-century parable by Henry Van Dyke. ~ Hal Erickson, Rovi

There are no critic reviews yet for The Fourth Wise Man. Keep checking Rotten Tomatoes for updates!

There are no featured reviews for The Fourth Wise Man at this time.