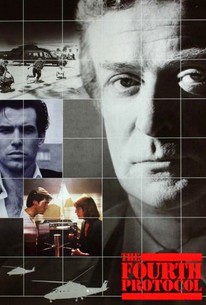 Scripted by Frederick Forsyth from his own novel, The Fourth Protocol is a fact-based spy thriller. The titular protocol is a secret agreement between America, Britain and Russia to cease smuggling nuclear weapons into their respective countries. This figures into the schemes of several rogue spies, who hope to destroy NATO by embarking on just such a smuggling endeavor. Russian agent Valeri Petrofsky (Pierce Brosnan) is ordered to stage a nuclear accident in England, then arrange the evidence to point to the Americans. British intelligence agent John Preston (Michael Caine) begins wondering why such nuclear-weapon components like lithium are showing up in the unlikeliest places. Ignored by his superiors, who figure that Preston is merely an old-line anti-Commie paranoic, Preston gathers the clues that will enable him to find out who's behind the potential breaking of The Fourth Protocol.

Ronnie Laughlin
as Driver at Scene

Neville Phillips
as Man in Overcoat

Rebecca Burrill
as Nurse
View All

News & Interviews for The Fourth Protocol

View All The Fourth Protocol News

Critic Reviews for The Fourth Protocol

What is missing is any real tension or psychological detail that might lend plausibility to all the hocus-pocus about East-West political and military intrigue.

''The Fourth Protocol'' is an entertaining, better-than-average variation on a format that has long since stopped offering anything new.

"Protocol" is espionage as exhilarating as the better Bond but with less of the winky camp. This is deadly stuff: We see just how easy atomic terrorism would be.

The Fourth Protocol is first-rate because it not only is a thriller, but it also pays attention to its characters and shows how their actions grow out of their personalities.

Caine, as always, is a joy to watch, whether grimly tracking his man, telling off his supercilious boss, or, sloshed on New Year's Eve, blowing a wall safe in a posh London pad.

A competent, if unremarkable, espionage thriller that is enjoyable while it lasts and forgotten moments after the credits roll.

Decent but unremarkable spy thriller, with an intersting villain provided by Pierce Brosnan.

Well-mounted espionage thriller with strong work from Caine and Brosnan.

Audience Reviews for The Fourth Protocol

A lot more action orientated than the Frederick Forsyth novel that it was based on and Michael Caine's character is, equally, far more of an action hero. Whilst it may have been deemed necessary to beef up the action to make a more exciting film, it loses some on the book's logic, depth and flow.

ome comments on this film have stated that there are unnecessary killings of agents or witnesses, this is done to show the politics of the film and how there must be no trace back to those who planned the operation, whilst also portraying that petrofsky is a lethal killer, and as Caine says in the film "the best". A great story, and very believable, spies that remain hidden from each other and no excruciating scene where the bad guy reveals his plot to the good guy. Would have been interesting to see what would have happened if the operation had turned out differently, or the ending for that matter! Of course one of the best things about this film is the acting as previously stated by other people. Caine brings his character to life and is very believable in the role of John Preston, the agent who cares, and will "bend" the rules to make sure things get down. Brosnan is similarly good, his character will stop at nothing to complete his mission, he is a stone cold killer and this is portrayed well, he doesn't let anything get in the way of the mission. All in all a very good little film, much better than some of the tripe we get from Hollywood and with one of the finest British casts i've seen in some time.

An okay spy thriller in this wildly implausible, but moderately entertaining, adaptation by Frederick Forsyth of his own novel, Michael Caine has to stop Russians exploding one of the atomic bombs American keeps in Britain.