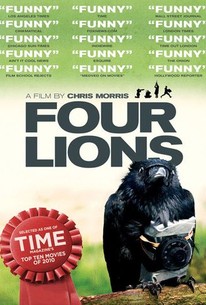 In a British city, four men have a secret plan. Omar is disillusioned about the treatment of Muslims around the world and is determined to become a soldier. This is the most exciting idea Waj has ever heard. Opposed to Omar and everyone else on earth is the white islamic convert Barry. He'd realize he joined the cell to channel his nihilism -- if he had half the self knowledge of a duck. Faisal is the odd man out. He can make a bomb -- but he can't blow himself up just now coz his sick dad has "started eating newspaper." Instead he's training crows to fly bombs through windows. This is what Omar has to deal with. They must strike a decisive blow on their own turf but can any of them strike a match without punching himself in the face?

Mohammad Aqil
as Mahmood
View All

[Morris's] new comedy has a provocative, ticklish premise -- five North England Muslims become suicide bombers, but can't decide who or what to take with them.

It's difficult to imagine a movie this boldly provocative about the underworld of violent jihad, much less one that actually inspires laughter.

The first feature, written and directed by satirist Chris Morris, may seem profane to some, but if you're doomed by watching it, at least you'll go down laughing.

The film wisely doesn't try to explore the roots of religious fanaticism and how it can manifest as murder: Instead, it simply accepts the world as it is and focuses on the ridiculous.

Four Lions is more interesting than riotous. Consider it an example - a well-paced, clever and understated compassionate example - of a filmmaker wrestling with fear.

Really, these guys are just knuckleheads. And the movie is full of outrageous laughs.

For an American audience, one obstacle to this film is digesting working-class British slang to translate the verbal gags; another is distinguishing the players without a scorecard...clever if at times farfetched...

Don't be like the Four Lions, but go check out their movie if you want a fresh perspective.

A clever and original comedy that, above all, refuses to let the terrorists win.

I laughed out loud a lot, and by the time the plot catches up to the plotters and people start dying, there's genuine poignancy amid the ridicule.

Those hungry for another taste of Morris' uncompromising, darkly-poignant portrayal of modern British society may well find themselves queuing for another ride down the rubber-dingy rapids.

Two nights before I watched 'Four Lions' I watched 'Peeping Tom' and the night before - 'Rashomon', two excedingly good films, perhaps they are the reason 'Four Lions' left me feeling cold and strangely enough, a feeling I'm not to familiar coming away from films feeling- annoyed at a missed chance (it's like 'Max Payne' again). Don't get me wrong, 'Four Lions' had me laughing at some of it's jokes, but the serious turns its took at the end felt unneeded and quite frankly, desperate, trying to get a reaction from the audience as the main character martyr themselves, main characters that throughout the film I felt no empathy for, so why should I care? 'Four Lions' had what it needed to be good, a new innovative premise and the cast to do it, what it came up with was a cheap anything for laughs (oh wait we're serious now but no we're not?), uneven mess.

I could only make it half way through this...I do NOT get where the humor was in this. Not for me, obviously.

So many memorable lines and actions, it just naturally makes you laugh and is great to watch over and over... and over...