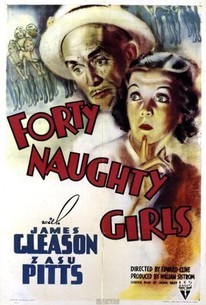 RKO Radio's "Hildegarde Withers" series, based on the mystery stories by Stuart Palmer, ground to a half with 40 Naughty Girls. ZaSu Pitts is once more miscast as crime-solving schoolmarm Hildegarde Withers, while James Gleason is rather better served as Inspector Oscar Piper. The title refers to a "Follies"-style Broadway revue, which serves as the backdrop for a baffling murder mystery. When the show's leading man is killed in full view of the audience, suspicion immediately falls upon the hapless prop man (Frank M. Thomas). But Hildegarde suspects that someone else was responsible, and, acting upon her impulses, assimilates a dizzying succession of contradictory clues to finger the actual killer. Among the "40 Naughty Girls" is 17-year-old Marjorie Lord, some 20 years before her TV fame as Danny Thomas's "wife." ~ Hal Erickson, Rovi

Barbara Pepper
as Showgirl
View All

There are no critic reviews yet for Forty Naughty Girls. Keep checking Rotten Tomatoes for updates!

There are no featured reviews for Forty Naughty Girls at this time.